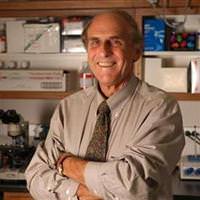 In the last few years of his life, Dr. Ralph Steinman made himself into an extraordinary human lab experiment, testing a series of unproven therapies - including some he helped to create - as he waged a very personal battle with pancreatic cancer.

The winner of the 2011 Nobel prize in medicine, who died only three days before the award was announced on Monday, ultimately tried as many as eight unproven treatments.

"He felt that human clinical investigation was the highest form of research, that it was critical to engage in it," Dr. Sarah Schlesinger, Steinman's clinical lab director and colleague at New York's Rockefeller University, told Reuters. "He had great criticism of how slowly the process moved ... he was impatient with data and mice," she added.

Friends and colleagues said Steinman was devoted to research that would make a difference in the lives of people.

That became more apparent after his own cancer diagnosis, recalls Dr. Louis Weiner, director of Georgetown Lombardi Comprehensive Cancer Center in Washington, D.C., who worked with Steinman on a cancer immunology panel through the American Association of Cancer Research.

"Because he was looking down the barrel of his own gun in a sense, he shared the cancer patient's sense of urgency that we identify new and effective treatments," Weiner said.

"He didn't want to be held hostage to failed concepts, to petty obstacles that interfere with the development of effective therapies. He wanted to see effective treatments made available to people so that they could be helped."

Steinman spent his entire career on immunology research for which he won the Nobel Prize, an honor he shares with American Bruce Beutler and French biologist Jules Hoffmann for their contributions to explaining the immune system.

When Steinman was diagnosed with stage-four pancreatic cancer four-and-a-half years ago, the cancer had already begun to spread to his lymph nodes.

"He elected to receive all of the conventional therapy that was available. He had surgery and conventional chemotherapy as well, but he was quite certain that was unlikely to cure him or even allow him very much time," Schlesinger said.

"The one-year survival for what he had was less than 5 percent."

Dr. Michel Nussenzweig, head of molecular immunology at Rockefeller who had worked with Steinman for more than three decades, said Steinman had already been working on dendritic cell therapy when he became ill and wanted to try it himself. The medical community rallied around.

"Many people all over the world helped to get a vaccine for him, but it was designed entirely by Ralph and the effort was coordinated by Ralph," Nussenzweig said.

Despite the urgency, it was played strictly by the book - which meant hours painstakingly filling out paperwork for U.S. regulators and carefully following study protocols.

"Sometimes you hear of people in the back room of the lab injecting themselves," Schlesinger said. "That was not this. An immense amount of my last four years was spent on the paperwork," said Schlesinger, whose working relationship with Steinman dates back to her high school days, when she spent summers working in his lab.

She said Food and Drug Administration regulators were quick and responsive, but did not cut the team any slack. "Things that would have taken months to turn around, turned around in days," she said.

Nussenzweig took a portion of Steinman's tumor and used that to grow cells in the lab that would help form the basis of personalized cancer treatments.

There were no immunotherapy trials going on at Rockefeller at the time that could help Steinman, and to start from scratch would be too time-consuming.

"He had all of these friends and colleagues who offered basically whatever they had," Schlesinger said.

Steinman initially got an experimental vaccine called GVAX, which was first developed by Dr. Elizabeth Jaffee at Johns Hopkins University in Baltimore and is now being developed by BioSante Pharmaceuticals.

"The first set of dendritic cells he received, we gave him in collaboration with a biotech company called Argos Therapeutics," Schlesinger said.

The researchers made dendritic cells from Steinman's blood and from blood precursor cells.

"We charged them with RNA that had been extracted from his tumor at the time of the operation and then we administered those cells to him," Schlesinger said.

He got them eight or nine times over a course of several months, and then also received chemotherapy.

Researchers at Baylor University Medical Center in Dallas also offered a melanoma vaccine they were working on for Steinman to try.

And then there were more conventional treatments: he got a chemotherapy drug from Eli Lilly and Co called gemcitabine or Gemzar, Bristol-Myers Squibb Co's newly approved melanoma treatment ipilimumab or Yervoy, Roche's Tarceva, which targets proteins involved in cancer growth, and a drug from Roche's Genentech unit that interferes with the so-called hedgehog signaling pathway that can become reactivated with certain cancers.

All of the treatments had been cleared for use by U.S. regulators in clinical trials.

"It's not like we were hooking something up in the lab and injecting him," Schlesinger said.

Steinman ultimately tried as many as eight therapies.

Schlesinger said he initially wanted to try each treatment one by one and study them to see if they offered any benefit. "Ralph believed he was going to be cured and he was going to publish this. So we had to do it in such a way that it would be publishable," said Schlesinger.

But both she and Nussenzweig put their foot down and insisted on doing treatments simultaneously.

"We literally had to argue with him that it was only going to be a case report anyway. There was no statistical significance to one person, no matter how well the experiment was designed, and we just had to save him," Schlesinger said.

She said she never questioned using the experimental drugs on her longtime friend and mentor. "I often felt like, 'Oh my God, why can't I do this better?"

Steinman lived four-and-a-half years after getting a diagnosis that typically kills people within a year or less.

Colleagues say it is impossible to know what prolonged his life. Whether it was surgery, chemotherapy or the experimental treatments, Steinman was convinced it was his own beloved dendritic cells, the specialized immune system that eventually won him the Nobel Prize.

He worked up to the very end. The day before entering the hospital for the last time, he spoke with Schlesinger for several hours about his lab's latest research on a vaccine for the human immunodeficiency virus or HIV.

"I could see him getting sicker, but his spirit was so indomitable and he was so optimistic," she said.

Steinman's health declined quickly after Schlesinger's meeting with him a week earlier (September 24).

"On Sunday he got short of breath, and he went into the hospital and he had pneumonia and a blood clot on his lung so he was being treated for that," she said. "Wednesday he really took a turn for the worse so in the end it was very quick."

Schlesinger was told by the family of his death on Saturday. "They sort of swore us to secrecy ... because he had a network of hundreds of people and they wanted privacy," she said. The plan had been for Michel Nussenzweig to tell the university of his passing on Monday morning.

But that was abandoned when the family got an e-mail around 5:30 a.m. from the Nobel Committee at Sweden's Karolinska Institute, saying he had won the medicine prize.

Nobel awards are not given to people posthumously and earlier in the week Steinman's daughter Alexis even joked with her father that he needed to hold out until the awards were announced on Monday.

Schlesinger said the secrecy about being admitted to the hospital had nothing to do with the Nobel prize.

"He didn't want to be bothered by anybody ... at the end he just wanted to be with his family," she said.

Goran Hansson, Secretary General of the Nobel Committee, said Steinman had been in Stockholm in March to give a lecture and seemed to be in good shape.

"We had done what we could in terms of checking on websites and with people and there was no indication that he was about to die immediately," Hansson said.

In the end, the Nobel Committee decided to award the prize to Steinman posthumously.

"I was so sorry he did not live long enough to receive the recognition, to get the happiness out of being recognized this way," Hansson said.

Many of his friends felt the same way. "I wish he'd had a chance to take a victory lap," Weiner said.