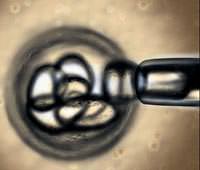 U.S. scientists for the first time have used a cloning technique to get tailor-made embryonic stem cells to grow in unfertilized human egg cells, a landmark finding and a potential new flashpoint for opponents of stem cell research.

The researchers were trying to prove it is possible to use a cloning technology called somatic cell nuclear transfer, or SCNT, to make embryonic stem cells that match a patient's DNA.

The achievement, published on Wednesday in the journal Nature, is significant because such patient-specific cells potentially can be transplanted to replace damaged cells in people with diabetes and other diseases without rejection by the immune system.

This technique could ignite new controversy because some opponents consider it to be cloning, which they fiercely oppose.

"This paper will be seen as significant both by those who are trying to use SCNT to produce human patient-specific embryonic stem cell lines and by those who oppose human 'cloning' experiments," said Professor Robin Lovell-Badge, a division head at Britain's National Institute for Medical Research.

Stem cells are the body's master cells, the source material for all other cells. Proponents of embryonic stem cells say they could transform medicine, providing treatments for blindness, juvenile diabetes or severe injuries.

Normally, SCNT involves removing genetic material from the nucleus of the host egg cell and replacing it with the nucleus from adult cells, the technique used to clone animals such as Dolly the sheep in 1996. But scientists so far have failed to get these cells to grow and divide beyond a very early stage in humans and non-human primates.

Scientists in this study, led by Dieter Egli and Scott Noggle at The New York Stem Cell Foundation Laboratory in New York, kept the genetic material from the host egg and simply added the nucleus from the adult cells.

"Rather surprisingly -- as this means that they are creating an embryo with too many copies of each chromosome -- these constructs developed well and efficiently to the blastocyst stage (the stage just before implantation, where the embryo is about 80 to 100 cells)," Lovell-Badge said in a statement.

She said the result falls short because the scientists did not obtain useful cell lines, but they may help explain why other techniques have failed.

"While this approach does not in itself provide a solution, it takes us a step closer to understanding where the problems lie," Herbert said.

He said the latest study offers a new approach that may allow scientists to compare different techniques of creating these important and powerful cells.

Embryonic stem cells are made from embryos that are just a few days old, but have been a point of controversy for some religious conservatives, who believe the destruction of any human embryo is wrong.

Scientists typically harvest embryonic stem cells from embryos leftover at fertility clinics, but the eggs in this study came from women who were paid around $8,000, roughly the same rate women are paid for egg donations for in-vitro fertilization.

Scientists have debated whether researchers should pay women for eggs used in stem cell research for fear the payments would act as an inducement to women to donate their eggs, a procedure and can take weeks, can cause discomfort and has some risk.

The goal of these studies is to work out the best ways to create cells that are "pluripotent" -- meaning they can be used to form any other kind of cell in the body.

Embryonic stem cells have this capability, but these cells cannot be tailored to match a specific patient's DNA, and treatments made from these cells might face rejection from the body, much like transplanted organs.

In 2006, scientists discovered a new way creating embryonic-like stem cells in the lab using patients' own skin cells and a potent mix of genes or "factors" that can turn back the clock on the adult cells, restoring them to a pluripotent state.

"The goal is to create customized or personalized stem cells that match a particular patient," said Dr. George Daley of the Harvard Stem Cell Institute and Harvard Medical School in a telephone interview.

But recently, several groups of scientists, including Daley's lab, have found that these iPS cells are not exactly the same as embryonic stem cells.

"We are just beginning to learn about this kind of iPS cell. It turns out they harbor a number of genetic problems," Daley said.

He said the latest study offers a new approach that may allow scientists to compare different techniques of creating these important and powerful cells.

"Which approach is the best? Only time will tell, but multiple routes forward may eventually speed the delivery of cell therapies for a broad range of unmet clinical needs."

The study was backed solely by private funding and followed ethical guidelines adopted by the American Society for Reproductive Medicine and the International Society for Stem Cell Research.

The research was done in the New York Stem Cell Foundation Laboratory in New York in collaboration with doctors and researchers at Columbia University Medical Center, whose institutional review board and stem cell committees reviewed and approved the study protocols.