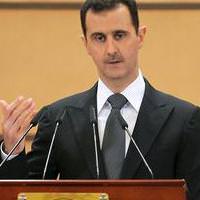 Syria threatened Sunday to retaliate against any country that formally recognizes a recently established opposition National Council which is seeking international support for the six-month-old uprising against President Bashar al-Assad.

The formation of the council has been welcomed by Assad's Western critics, including the United States and France, however they have not embraced it diplomatically as they did the Libyan rebels who overthrew Muammar Gaddafi.

"We will take tough measures against any state which recognizes this illegitimate council," Foreign Minister Walid al-Moualem told a news conference in Damascus.

Speaking alongside a group of Latin American ministers who visited Syria to show support for Assad, Moualem also dismissed Turkish criticism of Assad's crackdown and said no one should think the West would launch military action against Syria.

"The West will not attack Syria because no one will pay the bill," he said. "The West chose economic sanctions to starve our people, under the pretext of protecting human rights."

The United Nations says 2,900 people have been killed in Assad's crackdown on mainly peaceful protests. The Syrian leadership blames armed groups backed by foreign powers for the violence, saying 1,100 members of the security forces have been killed since the unrest broke out in March.

Activists reported clashes across the country Sunday, from Jabal al-Zawiyah near the northern border with Turkey to the southern province of Deraa.

The Syrian Observatory for Human rights said seven people were killed in shooting in the central city of Homs, adding that by late evening communications to the city were cut after the sound of explosions were heard.

Three people were also killed in rural areas around the city of Hama during fighting between troops and gunmen believed to be army defectors, the British-based organization said.
It said there were also fatalities in clashes between the army and suspected defectors in Jabal al-Zawiyah and in Dael, in Deraa province, but gave no death tolls for those clashes.

In the town of Dumeir, 40 km (25 miles) northeast of Damascus, the Observatory said security forces killed three people Sunday when they opened fire on the funeral procession of a youth whose body was returned after he died in captivity.

Foreign media are largely barred from entering Syria and it was not possible to confirm the reports independently.

Saturday, activists said security forces killed at least two people when they shot at tens of thousands of mourners at the funeral of a Kurdish opposition figure.

Moualem described Mishaal al-Tammo as a martyr killed by terrorists, suggesting he was targeted because he opposed foreign intervention in Syria. Tammo's family have blamed Syrian authorities for his death.

"Turkey expects the Syrian administration to realize as soon as possible that the acts of violence designed to suppress the opposition in Syria... cannot turn back the course of history," a foreign ministry statement said.

TENSION NEAR BORDER
Once a close ally of Assad's, Turkey has hosted several meetings of the opposition National Council. It has also given shelter to thousands of Syrian refugees, as well as the most senior Syrian army officer to defect from Assad's military.

According to news reports, Sunday Syrian police were stopping Turkish citizens from entering Syria at the border town of Nusaybin, a few miles (km) north of Qamishli where Tammo was killed, because of increased tensions in the area.

Prime Minister Tayyip Erdogan has said he plans to impose sanctions on Syria and has launched military exercises in Hatay province, where Syria has a longstanding territorial claim.

"Syria's hands are not tied," Moualem responded. "Whoever throws a rose at it, it will throw a rose back."

The official SANA news agency said Assad told the ministers from Venezuela, Cuba, Bolivia, Ecuador and Nicaragua, part of a group at odds with the United States, that Syria was focusing on "political reform...and ending the phenomenon of armed (groups)."

In response to the protests, Assad has formally ended nearly 50 years of emergency rule and pledged multi-party parliamentary elections next year, but opponents say the moves are meaningless while security forces continue to kill protesters.

Diplomats and analysts say the protests have been largely peaceful but there have been a steady flow of army defections and increasing reports of armed clashes with security forces.

"Many in the West say this is a peaceful revolution and (these are) peaceful demonstrations," Moualem said. "They do not acknowledge the presence of armed terrorist groups, (but) they finance them and smuggle weapons to them."

Bourhan Ghalioun, chairman of the opposition National Council, said in Sweden Saturday the organization was seeking Assad's removal by peaceful methods and called on global powers to do more to help achieve this goal.
"We demand that the international community assume its responsibilities and find ways to help protect Syrian civilians," he said, sharply criticising Russia for helping block a U.N. Security Council resolution on Syria.