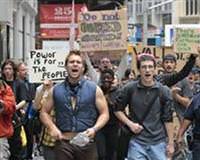 Hundreds of anti-Wall Street protesters marched on the New York homes of wealthy executives on Tuesday, triggering one of their targets, billionaire hedge fund manager John Paulson, to defend his wealth.

Around 500 people marched through Manhattan's Upper East Side, passing the high-rise buildings where many of the executives live. Among them are Paulson, global media mogul Rupert Murdoch, JPMorgan Chase chief executive Jamie Dimon and David Koch, co-founder of energy firm Koch Industries.

The protesters chanted "Banks got bailed out, we got sold out" and "Hey you billionaires, pay your fair share" and carried signs that read "Stop robbing from the middle class to pay the rich" and "We are the 99 percent," a reference to the idea that the top 1 percent of Americans have too much.

Mustafa Ibrahim, 23, an engineer marched on the "Billionaire's Tour" during a visit to New York from Cairo, where he said he was arrested during a popular uprising this year which toppled Egyptian autocrat Hosni Mubarak.

"It's pretty much the same thing as Egypt," Ibrahim said. "The problem is the rich keep getting richer and the poor are getting poorer."

Since September 17 protesters have been camped out in a park in Lower Manhattan near Wall Street, rallying against bailouts for banks during the recession, which allowed them to earn huge profits while average Americans suffer high unemployment and job insecurity with little help.

As protesters took their grievances to the homes of the rich, the Paulson & Co hedge fund defended its status.

Paulson took home $5 billion in 2010, the hedge fund industry's biggest ever paycheck, but this year one of his main funds has fallen 47 percent after he mistimed a call that the economy would recover strongly.

"The top 1 percent of New Yorkers pay over 40 percent of all income taxes, providing huge benefits to everyone in our city and state," Paulson & Co said in a statement, adding that New York has the highest income taxes of any U.S. states.

"Instead of vilifying our most successful businesses, we should be supporting them and encouraging them to remain in New York City and continue to grow," it said.

The Occupy Wall Street movement is burgeoning ahead of planned global protests on Saturday. On Wednesday, the Service Employees International Union will march on New York City's financial district for good jobs, while U.S. college students plan solidarity protests on Thursday on at least 56 campuses.

According to Occupy Together, which has become an online hub for protest activity, the Occupy Wall Street movement has sparked rallies in more than 1,400 cities throughout the United States and around the world.

Goldman Sachs boss Lloyd Blankfein canceled a talk at New York's Barnard College, and though the company -- which received and repaid a big federal bailout during the financial crisis -- said a scheduling conflict would keep him away, students from nearby Columbia University were planning to protest his appearance.

"Don't look at the Arab spring, look here because things are going to boil over," said protester Charles Evans, 62, as he marched on the "Billionaire's Tour."

Fifth Avenue resident Lorna Goldberg, 57, said she was surprised to see the protesters near her home. "But I guess they're getting their point across by coming here," she added.

Vice President Joe Biden, a Democrat, last week likened the growth of the protest movement to the grass-roots Tea Party, but the conservative group on Tuesday sought to distance itself from the protesters.

The Tea Party Patriots said in a statement that its supporters were "not lawbreakers, they don't hate the police, they don't even litter."