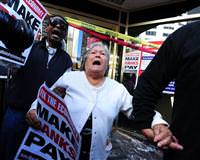 Hundreds of office cleaners and guards marched near Wall Street on Wednesday demanding good jobs and protesting economic inequality, while a smaller group of demonstrators rallied at JPMorgan Chase's skyscraper.

The marches were part of a growing Occupy Wall Street movement, the month-long protests that have inspired solidarity rallies planned for Thursday at some 90 U.S. college campuses. Demonstrations have occurred in more than 1,400 cities around the world.

The movement began on September 17, when protesters set up camp in a park near Wall Street in Lower Manhattan, upset that the billions of dollars in bank bailouts doled out during the recession allowed banks to resume earning huge profits while average Americans have had no relief from high unemployment and job insecurity.

Participants also complain the richest 1 percent of Americans do not pay their fair share of taxes.

More than 750 cleaners, security guards and other building service workers converged on the financial district to march for better-paying jobs, while at a nearby rally outside a JPMorgan Chase skyscraper police said about 100 people walked around the building and then returned to their camp in the park.

Police said they arrested four people at the bank building.

Barricades had been placed outside the JPMorgan Chase building in preparation for the protest, and many police officers stood on duty.

The building service workers union, the Service Employees International Union, which organized the march, said contracts for tens of thousands of workers were about to expire.

"We're out here because there's no jobs and we're about to lose our jobs. We're tired and we're fed up and we need these people in here to hear us," said Carla Thomas, 47, a building security guard, gesturing toward Wall Street.

People who live near Zuccotti Park where the protesters are based have been complaining that loud music at night, including bongo playing, is keeping their children awake.

New York Mayor Michael Bloomberg has said the protests can continue as long as laws are obeyed.

Deputy Mayor Cas Holloway said the mayor told the protesters the park would be cleaned on Friday due to unsanitary conditions created over the past three weeks.

"The cleaning will be done in stages and the protesters will be able to return to the areas that have been cleaned provided they abide by the rules" established for the park, Holloway said in a statement.

At a rally in San Francisco, 11 protesters were arrested on Wednesday when up to 200 people demonstrated at the Wells Fargo corporate headquarters, blocking entrances and sticking posters on the building, one that read: "My bank went to bail-out land and all I got was a lousy recession."

Several of those being criticized by the protesters have shown understanding, sympathy or support for the Occupy Wall Street movement, including a U.S. Federal Reserve official, President Barack Obama and some corporate executives.

Citigroup Chief Executive Vikram Pandit said on Wednesday the sentiments of the protesters were "completely understandable" and that he would be happy to speak with them.

"Trust has been broken between financial institutions and the citizens of the U.S., and that is Wall Street's job, to reach out to Main Street and rebuild that trust," he told a business breakfast hosted by Fortune magazine.

Bill Gross, manager of PIMCO, the world's biggest bond fund, posted on Twitter late on Tuesday: "Class warfare by the 99%? Of course, they're fighting back after 30 years of being shot at."

A Reuters/Ipsos poll found on Wednesday that 82 percent of Americans had heard of the Occupy Wall Street protest movement, and 38 percent felt favorably toward it. Thirty-five percent were undecided, and about one-quarter unfavorable.

Hundreds of people were arrested in previous rallies in New York, and police have used pepper spray on protesters.

Demonstrators were arrested in Washington, Boston and Chicago on Tuesday at protests inspired by the Occupy Wall Street movement.