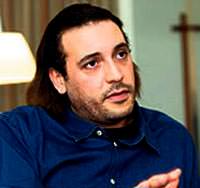 Muammar Gaddafi's son Mo'tassim was captured in Sirte on Wednesday while trying to escape the town, the head of the Tripoli Revolutionary Council said.

He was taken to Benghazi where he was questioned, other ruling National Transitional Council (NTC) sources based in Sirte and Benghazi said. They said he had been caught as he tried to leave Sirte in a car with a family.

"I can confirm there is an important figure who was arrested and is being transferred to Benghazi," Mohammed Bouker of the National Working Group, an NTC committee, told Reuters.

"The name will be announced tomorrow for security reasons."

NTC sources had earlier told Reuters that Mo'tassim, formerly Libya's national security adviser, had been captured on Tuesday. He is so far the only member of Gaddafi's immediate family to be captured by the NTC forces who led the rebellion.

Celebratory bursts of machinegun fire and fireworks lit up the skies over the capital Tripoli as reports of Mo'tassim's arrest circulated.

Ships sounded their whistles in the city's harbour and car drivers honked their horns, many with passengers hanging from the windows shouting at passersby.

"Now we have one Gaddafi," shouted Mohammed, a 23-year-old engineer, who, despite it being banned in Libya, swigged from a bottle of alcohol with three friends. "Soon we will have the old man Gaddafi and all the Gaddafis."

One man celebrated with a small girl on his shoulders, as men nearby unleashed volleys of gunfire into the air, sending some fleeing into doorways to avoid falling bullets. Local reports said several people injured by the celebratory gunfire were taken to hospital.

"Look at this child," the man told Reuters in English. "For her there will be no memory of Gaddafi. He will be an old dream, just a bad dream. That is all."

NTC military sources said Mo'tassim was being held in the Boatneh military camp in Benghazi and that he was "exhausted" but uninjured.

Another senior NTC military official told Reuters that Gaddafi's son had cropped short his usually longer hair in an attempt to disguise himself.

Muammar Gaddafi, Libya's ousted leader of 42 years, and his most politically prominent son, Saif al-Islam, have been on the run since the fall of Tripoli on Aug. 23.

Gaddafi's daughter Aisha, her brothers Hannibal and Mohammed, their mother Safi and several other family members fled to Algeria in August and have been there since. Another son, Saadi, is in Niger.

Most of Sirte, Gaddafi's hometown, has been captured by fighters loyal to the NTC in recent days after weeks of siege.

Interim government officials had said they believed Mo'tassim was hiding in the city's hospital.