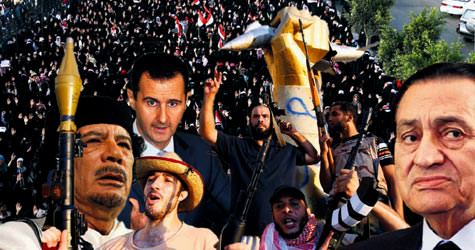 The uprisings that swept the Middle East this year have cost the most affected countries more than $55 billion, a new report says, but the resulting high oil prices have strengthened other producing countries.

A statistical analysis of International Monetary Fund (IMF) data by political risk consultancy Geopolicity showed that countries that had seen the bloodiest confrontations -- Libya and Syria -- were bearing the economic brunt, followed by Egypt, Tunisia, Bahrain and Yemen.

Between them, those states saw $20.6 billion wiped off their gross domestic product and public finances eroded by another $35.3 billion as revenues slumped and costs rose.

But as the major oil producers such as the United Arab Emirates, Saudi Arabia and Kuwait avoided significant unrest -- often through increasing handouts as oil prices rose -- they saw their GDP grow. Oil prices rocketed from around $90 a barrel of Brent crude at the start of the year to just short of $130 in May before retreating to around $113 now.

"As a result, the overall impact of the 'Arab Spring' across the Arab realm has been mixed but positive in aggregate terms," the report estimated, saying overall the year to September saw some $38.9 billion added to regional productivity.

Libya looks to have been the worst affected, with economic activity across the country -- including oil exports -- halted at an estimated cost to GDP of $7.7 billion, or more than 28 percent. Total costs to the fiscal balance were estimated at $6.5 billion, roughly 29 percent of gross domestic product.

In Egypt, nine months of turmoil eroded some 4.2 percent of gross domestic product with public expenditure rising to $5.5 billion just as public revenues fell by $75 million.

In Syria, where protests have continued throughout the year in the face of a bloody crackdown, the impact is hard to model but early indications suggested a total cost to the Syrian economy of some $6 billion or 4.5 percent of GDP.

The report said the number of Yemenis below the poverty line was expected to be pushed above 15 percent as a result of currency falls and protracted unrest. Total cost to the economy was estimated at 6.3 percent of GDP, with the fiscal balance deteriorating by $858 million, 44.9 percent of GDP.

Tunisia, where the protests began in late 2010, lost some $2.0 billion from its GDP, roughly 5.2 percent, with negative impacts across almost all sectors of the economy including tourism, mining, phosphates and fishing. Tunisia's government increased expenditure by some $746 million, pushing its fiscal balance some $489 million into the red.

Saudi Arabia's newly instituted handouts and wider public investment programme, the report estimated, amounted to some $30 billion -- perhaps seen by the kingdom's rulers as a way of avoiding real reform. But increased oil prices and production helped boost gross domestic product by more than $5 billion and push up public revenues by $60.9 billion.

In Bahrain, oil helped cushion the impact of weeks of protest, with the fall in GDP relatively low at some at 2.77 percent. Public expenditure rose some $2.1 billion, partly because of cash transfers of $2,660 to each family.

None of these steps, the report argued, addressed the underlying causes behind the unrest. A better solution, it said, was much broader international support through the G20 or United Nations aimed at much wider reform.