Is a winter of discontent on the way? 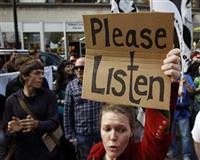 In the corridors of Whitehall, Washington, think tanks and even investment banks, there are dark murmurs that the events of the year so far may only be the beginning.

Some fear the world faces a systemic rise in anger, protest and political volatility that could last years or even decades.

In many countries, a young social media-connected generation is losing faith in traditional structures of government and business, arguing it has been betrayed and denied opportunity.

In the developed world, the wider middle class fears its prosperity has evaporated, demanding someone be held accountable and the global elite find a way of delivering growth once more.

"This could be with us for a long time," said Jack Goldstone, professor of public policy at George Mason University in Washington D.C. and an expert in demographics.

"You have a generation who are fed up being told what to do by rich western countries or rich western people. In Egypt, they took down one government but they may not like what replaces it and they may take that down too. It's going to be a difficult period."

In the Western world, the crisis initially produced rather less physical protest than many expected. But it now seems on the rise. Greece, Spain, Italy and Britain have all seen some of their worst unrest in decades.

On Saturday, the U.S. protests against the global financial system that began in a New York Park in mid-September spilled overseas to dozens of countries as sometimes hundreds, sometimes tens of thousands took to the streets.

Many were peaceful, but in Rome cars were torched and police fought running battles with "black bloc" activists. In London and several other cities, protesters in tents stayed on.

"Even a small number of protesters to start with can inspire many more to come along and join in," said Tim Hardy, founder of left-wing blog "Beyond Clicktivism" and a regular attendee at London protests. "If they manage to establish a base camp, I expect numbers will swell."

On Friday the Milan office of U.S. bank Goldman Sachs was attacked by an angry mob. Most protest has been peaceful, but is likely ramp up political pressure on the financial industry. Already, policymakers talk of tighter regulation and targeted tax rises and media attention is increasingly turning to the activities of tax havens and secretive banks.

"This is the season of demanding accountability and the application of the rule of law, especially targeting the ruling political elites and the economic elites as well."

Britain's August riots showed post-crisis unrest might not always be overtly political, with tough inner-city youths using social media platforms to co-ordinate looting and arson. With so much of the world in flux, some expect that kind of nihilistic violence to also rise.

As the summer heat eases in the Middle East, the region seems braced for more trouble.

Last week saw the worst clashes since Mubarak's fall, primarily between the military and Coptic Christians. Many in Tunisia, the first state to oust its leader, make similar complaints.

Conflict and confrontation in Syria look to be worsening, with sporadic reports of defecting troops and others taking up arms against Bashar al-Assad. In Saudi Arabia, Bahrain and other countries, analysts see a risk of new protests in coming months.

A host of other dissident movements are showing increasing confidence. In Israel, India, Chile, China and elsewhere, online or street protesters have often managed to win concessions.

Some believe the current anger against autocrats, bankers and elites is a symptom of fundamental shifts in the structure of global populations.

In the Middle East and North Africa, one of the key drivers has been a large bulge in the youthful population struggling to find work. An educated, westernized group using social media tools to coordinate got protests started, quickly joined by broader masses angry at rising food prices.

In western states, there are strains caused by an aging population that is driving up government costs, reducing growth and blocking jobs from younger people.

At worst, some experts warn that could produce an economic malaise that lasts for decades.

"It is these demographic issues that are driving much of what we are seeing at the moment," said George Mason University's Goldstone.

"It makes politics very unpredictable. You can get paralysis, but you can also see dramatic shifts in policy to left or right. You can see the rise of ideologues as we saw in the 1930s. We are very much at the beginning of this."