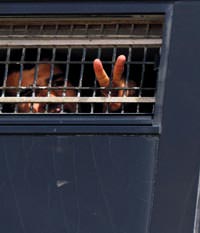 The last time Asma al-Kurd saw her father, she was 18 months old. That was 20 years ago, before he was sentenced to eight terms of life imprisonment for attacks that killed Israelis.

Baseem al-Kurd, now 43, is slated to be one of 477 Palestinians due to be exchanged on Tuesday for captive Israeli soldier Gilad Shalit in a deal with Hamas, an Islamist group dedicated to Israel's destruction.

"We have imagined many things we were deprived of doing and we will do with him when he is freed," said the Hamas member's 21-year-old daughter, dressed in traditional Islamic garb, her face covered by a veil.

Workers were putting the finishing touches to repairs of Kurd's home, damaged in a recent Israeli air strike on a sports center belonging to the Islamic Jihad group after it fired rockets into Israel.

In Israel, the lopsided swap taking in dozens of Palestinians convicted of deadly attacks has been met with mixed emotions -- joy at the end of Shalit's five years of captivity and angst over the price paid for his release.

Kurd's mother, Dalal, 65, watched as new lamps were installed in her son's home in the Gaza Strip and its walls covered with a fresh coat of paint.

"We are preparing his house for him. We hope we can compensate him for all the deprivation he suffered," she said.

"Hamas had promised and it fulfilled its promise," said one slogan near the site where a public rally is planned for the 295 prisoners due to be released to the Gaza Strip.

Happiness over news of the imminent mass release has been tempered in some families by news that their relatives were being sent into exile as part of the deal, and would not be allowed an emotional homecoming.

That means some of the West Bank detainees will be sent either to another Middle East country or to the Gaza Strip, a small Palestinian coastal enclave that is sealed off by Israeli forces and very hard to visit for outsiders.

Mousa Waswas, 29, who was sentenced to eight life terms for his part in the killing of eight Israelis, is one such Palestinian facing deportation.

His family comes from the West Bank city of Hebron and they have decorated the exterior walls of their home to celebrate his freedom, even if he won't see them with his own eyes.

"If he goes to Turkey, Gaza or Egypt I will crawl to see him," his mother, Khawla Waswas, told Reuters Television.

In a second stage of the Egyptian- and German-brokered swap, Israel is to free another 550 jailed Palestinians. No date has been announced for their release.

Shalit was captured in June 2006 by Palestinian militants who had tunnelled into Israel from the Gaza Strip. He has been held in the Hamas -ruled territory ever since.