Pope wheeled up St Peter's instead of walking 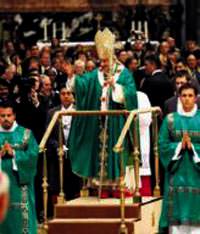 Pope Benedict was wheeled up the main aisle of St Peter's Basilica on a mobile platform at a ceremony on Sunday to spare him the unnecessary fatigue of walking, but the Vatican said there was no concern for his overall health.

The 84-year-old pontiff stood on the platform as aides pushed it up the central aisle, which is about 100 metres (yards) long.

Wearing green vestments, he blessed the faithful and then celebrated Mass from the main altar. He appeared to be in good health. He later used the same mobile platform to leave the basilica.

"This is just not to tire him," chief Vatican spokesman Father Federico Lombardi said. "Nothing else should be read into the general state of his health, which is good."

The platform, which has three steps and brass handles, was built to transport the late Pope John Paul during the last five years of his life.

John Paul, however, had suffered a broken femur and had undergone hip replacement surgery, an operation that left him with a permanent limp and other walking difficulties.

Benedict, who was elected in 2005 after John Paul's death, has appeared to be in generally good health, though Vatican sources say he suffers from high blood pressure.

Benedict's schedule of public and private engagements has been far less hectic than that of his predecessor.

Aides say that because he was already 78 when he was elected, unlike John Paul who was 58, Benedict decided to pace himself more carefully and limit his activities.

During the mass on Sunday, the pope announced that he was calling a "Year of Faith" for the entire 1.2 billion-member Roman Catholic Church that would start on October 11, 2012.

He said he hoped the event would be an opportunity for all Catholics to "strengthen our faith in God," and that he would soon publish an "apostolic letter" outlining what he wants the Church to gain from the year of reflection.

Benedict has started a new Vatican office, the Pontifical Council for the Promotion of New Evangelisation, to shore up and spread the faith in economically advanced regions such as Europe and the United States, where the Vatican believes it has been weakened by secularism.