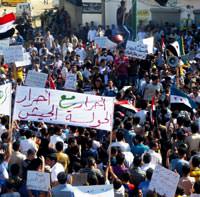 Minister of Foreign Affairs Davutoğlu met members of Syria’s newly-formed opposition National Council in the Turkish capital on Monday, a foreign ministry official said, which is the first time a state official has acknowledged such a meeting with the council.

The official, who spoke on condition of anonymity, said Foreign Minister Ahmet Davutoğlu told the members of the Burhan Galyun-led Syrian National Council to work in a peaceful manner for democratic transformation in Syria.
Davutoğlu advised the council members to work together. "Do not fall apart due to small differences amongst yourselves. Turkey is willing to offer all forms of democratic support." The council responded by stating, "We have become a union. All groups have come together. Grant us permission to open an office in Istanbul." The council also stated that Turkey's support will be important to ensure the voice of the Syrian opposition is heard. The council is expected to open an office in Ataköy.
Earlier this month, Syria warned it would retaliate against any country that formally recognizes the National Council set up by opponents of President Bashar al-Assad.
The formation of the council has been welcomed by Western countries including the United States and France. However, unlike the transitional council set up by Libyan rebels who overthrew Muammar Gaddafi, Western governments have not offered the SNC any formal recognition.