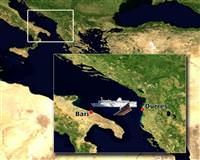 Eight sailors were lost at sea after a Turkish merchant ship collided with a passenger ferry off the coast of Albania on Thursday, Albanian and Turkish officials said.

"We have found only life jackets and the ship's safety boat," the Albanian coast-guard's deputy commander, Artur Mecollari, told Reuters by phone. "The collision right in the middle of the ship has been fatal. It sunk in nine minutes."

The ship's captain and his deputy were rescued by the ferry.

The "Reina 1", a Turkish-owned ship carrying a Maltese flag, collided with the Turkish-flagged "Ankara" ferry 22 miles off Durres port early on Thursday. There were no reports of injuries among the ferry's 189 passengers and 46 crew were hurt.

The boat's captain Ahmet D. and his assistant Ahmet S. were saved form the attack which they claim occurred due to high waves.