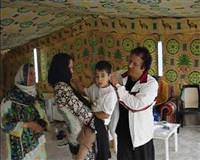 NATO called an end to its air war in Libya, and the clan of Muammar Gaddafi demanded a chance to bury the body that lay on display in a meat locker after a death as brutal and chaotic as his 42-year rule.

In a statement on a Syria-based pro-Gaddafi television station, the ousted dictator's family asked for the bodies of Gaddafi, his son Mo'tassim, and others who were killed on Thursday by fighters who overran his hometown Sirte.

"We call on the UN, the Organization of the Islamic Conference and Amnesty International to force the Transitional Council to hand over the martyrs' bodies to our tribe in Sirte and to allow them to perform their burial ceremony in accordance with Islamic customs and rules," the statement said.

At an understated and sparsely-attended news conference late on Friday, NATO Secretary-General Anders Fogh Rasmussen said the Western alliance had taken a preliminary decision to call a halt to Operation Unified Protector on October 31.

Like other Western officials, Rasmussen expressed no regrets in public about the gruesome death of the deposed Libyan dictator, who was captured alive by the forces of the National Transitional Council but was brought dead to a hospital.

"We mounted a complex operation with unprecedented speed and conducted it with the greatest of care," Rasmussen said. "I'm very proud of what we have achieved."

The NATO operation, officially intended to protect civilians, effectively ended on Thursday with French warplanes blasting Gaddafi's convoy as he and others tried to escape a final stand in Sirte.

Gaddafi was captured wounded but alive hiding in a drain under a road. The world has since seen grainy film of him being roughed up by his captors while he pleads with them to respect his rights.

NTC officials have said Gaddafi later died of wounds in the ambulance, but the ambulance driver, Ali Jaghdoun, told Reuters that Gaddafi was already dead when he picked up the body.

"I didn't try to revive him because he was already dead," Jaghdoun said, in testimony that adds greater weight to the widespread assumption that Gaddafi was lynched.

The U.N. human rights arm said an investigation was needed to into whether he was summarily executed. The interim leaders have yet to decide what to do with the corpse.

In Misrata, a local commander, Addul-Salam Eleiwa, showed off the body, torso bare, on a mattress inside a metal-lined cold-store by a market on Friday. There was a bullet hole in his head.

"He will get his rights, like any Muslim. His body will be washed and treated with dignity. I expect he will be buried in a Muslim cemetery within 24 hours," he said.

Dozens of people, many with cellphone cameras, filed in to see that he was dead.

"There's something in our hearts we want to get out," said Abdullah al-Suweisi, 30, as he waited. "It is the injustice of 40 years. There is hatred inside. We want to see him."

In Tripoli, Gaddafi's death prompted a carnival-like celebration, with fireworks, a bouncy castle and candy floss for the children. "Muammar, bad," one small girl said to foreign journalists in English. "Boom boom."

"For some people from outside Libya it could look wrong that we are celebrating a death with our children," said one man with a child on his shoulders. "But it was 42 years with the devil."

Saif al-Islam, Gaddafi's son and heir-apparent remains at large, believed by NTC officials to have escaped from besieged Sirte and headed for a southern border.

Without the glue of hatred for Gaddafi and his tribe to unite the factions, some fear a descent into the kind of strife that bedevils Iraq after Saddam Hussein. Optimists say that so far Libya's new rulers have quarreled but not fought.

In Washington, State Department spokesman Mark Toner said the NTC had promised to explain how Gaddafi was killed.

"They're dealing with the death itself as well as the aftermath in as transparent a way as I think they can," he said. "They've fought bravely to liberate their country from this dictator. And, you know, he met an ignominious end yesterday."

One sign of a move toward normalcy was the United Nations Security Council beginning talks on lifting the no-fly-zone imposed by resolution 1973 of March 17. Envoys expected the flying ban, designed to protect civilians, would be ended after consultations with Libya's new rulers.