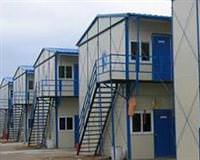 Israel said on Tuesday it was launching an airlift of supplies to help Turkey cope with a devastating earthquake, following a request from Ankara, with a first shipment of prefabricated homes destined for shipment on Wednesday.

Israel's Foreign Ministry said Ankara had sought the aid via the Israeli embassy there, after Prime Minister Benjamin Netanyahu offered assistance in a telephone call to Turkish Prime Minister Recep Tayyip Erdoğan after the quake struck on Sunday.
The humanitarian step taken as more than 400 were reported dead in the disaster that struck southeastern Turkey, was seen as possibly easing diplomatic strains between the allies since Israel's killing of nine Turks on board a Gaza-bound flotilla last year.
A spokesman for Israeli Defence Minister Ehud Barak said that "tomorrow (Wednesday) afternoon a first aircraft will fly from Israel to Turkey with several prefabricated homes," suggesting the shipment would be followed by others.
Israeli Foreign Ministry Yigal Palmor said Turkey had "relayed a request to the embassy in Ankara for mobile homes" and that Israel was checking into the logistics of shipping these supplies.
"We are checking what we can do, and will do whatever we can," Palmor said.
In Ankara, a Foreign Ministry official said Turkey had requested prefabricated housing and tents from more than 30 countries.
"We informed all countries who offered help, including Israel, of a request on specific items for post-emergency material, such as prefabricated houses, containers and tents," the official said.
Israel, geographically close to Turkey, with each country situated on opposite sides of Syria and Lebanon, has sent equipment and rescue teams to Turkey after past earthquakes. Turkey sent fire-fighting planes last December to help Israel battle a brush fire that killed 41 people.
Turkey's Deputy Prime Minister Bülent Arınç denied on Monday that Ankara had declined an offer of aid from Israel.