USA gets tough against protesters 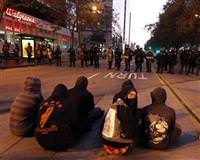 Those arrested faced charges for camping or assembling without a permit in Frank Ogawa Plaza, the site of two weeks of "Occupy Wall Street" protests, Oakland spokeswoman Karen Boyd said.

The plaza remained cordoned off at midday on Tuesday for cleanup of debris, Boyd said. Once cleaned, it is expected to be reopened and protesters will be free to use it for daytime demonstrations, she said.

The city said it began to clear the plaza before dawn and had "contained" the area in about an hour.

About 350 people were in the plaza when police began to clear the area, Boyd said. Police deployed beanbags and sprayed gas at protesters, she said. There were no reports of injuries.

The protest was the Oakland version of the movement launched more than a month ago as Occupy Wall Street in New York.

The protesters are angry at government bailouts of big banks, high unemployment, and economic inequality in the United States. Demonstrations have spread across the nation and overseas, although crowds remain relatively small in most cities.

Oakland said in a statement it told protesters last Thursday to cease overnight camping and cooking at the plaza.

"Over the last week it was apparent that neither the demonstrators nor the city could maintain safe or sanitary conditions, or control the ongoing vandalism," Oakland Mayor Jean Quan said in a statement.

The city said conditions at the plaza had begun to deteriorate by the second week of the protests with police, fire and medical care reporting they were denied access to the plaza to respond to service calls.

The city also said it had received reports of a sexual assault and a severe beating, and that the lack of sanitation had worsened a rodent problem in the plaza. Officials also said the plaza was damaged by graffiti, litter and vandalism.

Hundreds of demonstrators have been arrested in New York since the protests began. There have also been numerous arrests in other cities.