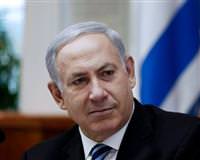 Israel’s Prime Minister Benjamin Netanyahu called Prime Minister Tayyip Erdoğan on Monday to offer condolences for those killed in a devastating earthquake and said the Jewish state was ready to help, officials of both countries said.

Relations between Israel and Turkey have been frayed since Israeli commandos killed nine Turks during a raid on an aid flotilla bound for the Israeli-blockaded Gaza Strip in 2010.
Sources at Erdoğan's office said Netanyahu reminded Erdoğan that Turkey sent fire-fighting planes in December last year to help Israel battle a brush fire that killed 41 people and said Israel was now ready to help Turkey.
At least 279 people were killed and more than 1,300 wounded when a 7.2 magnitude earthquake struck mainly Kurdish southeast Turkey on Sunday.
An Israeli official, speaking on condition of anonymity, confirmed the call between the two men took place.
"Prime Minister Netanyahu expressed his condolences to the victims of the terrible earthquake and offered Israel's help in dealing with the tragedy. The Turkish prime minister thanked him for his words and for his offer to help," the official said.
It was too early to know if the exchange would lead to a rapprochement. Turkey has demanded Israel apologize and pay compensation for the killings and lift the blockade on Gaza as a condition to normalize ties with its former strategic ally.
Tensions between the two U.S. allies rose last month when Turkey expelled the Israeli ambassador after Israel refused to apologize and said its marines acted in self-defense in clashes with pro-Palestinian activists on one of the vessels.
Israel has sent rescue teams to quake-prone Turkey in the past after earthquakes struck.
Turkey has received offers of assistance from countries as far as China and Pakistan but so far has accepted aid only from Iran and Azerbaijan.
Earlier on Monday, Turkey's Deputy Prime Minister Bulent Arınç denied Turkey had declined an offer of aid from Israel.
"Our ties with Israel may not be at desired levels, but it's out of the question to refuse humanitarian offers," Arınç told a news conference.
"Turkey is thankful and respects all countries who offered help," he said, but cautioned that "if aid from all countries arrived in Van it would be chaos".