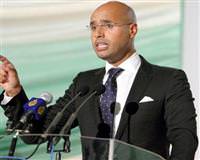 Saif al-Islam Gaddafi, fearing for his life if captured in Libya, has tried to arrange for an aircraft to fly him out of his desert refuge and into the custody of the Hague war crimes court, a senior Libyan official said Thursday.

Details were sketchy but a picture has built up since his father's grisly killing while in the hands of vengeful rebel fighters a week ago that suggests Muammar Gaddafi's 39-year-old heir-apparent has taken refuge among Sahara nomads and is seeking a safe haven abroad.

The senior Libyan official in the National Transitional Council said later that Saif al-Islam had crossed the border into Niger but had not yet found a way to hand himself in to the International Criminal Court at The Hague.

"There is a contact with Mali and with South Africa and with another neighboring country to organize his exit ... He hasn't got confirmation yet, he's still waiting," said the official, who declined to be named.

Even if he can still draw on some of the vast fortune the Gaddafi clan built up abroad during 42 years in control of North Africa's main oilfields, his indictment by the ICC over his efforts to crush the revolt limits the options open to him.

That may explain an apparent willingness, in communications monitored by intelligence services and shared with Libya's interim rulers, to discuss a surrender to the ICC, whereas his mother and surviving siblings simply fled to Algeria and Niger.

The Court, which relies on signatory states to hand over suspects, said it was trying to confirm the whereabouts and intentions of Saif al-Islam and ex-intelligence chief Abdullah al-Senussi, the third man indicted along with the elder Gaddafi.

A source with the NTC, which drove the Gaddafis from power in Tripoli in August, told Reuters the two surviving indictees were together, protected by Tuareg nomads.

"Saif is concerned about his safety," the source said. "He believes handing himself over is the best option for him."

The younger Gaddafi, once seen as a potential liberal reformer but who adopted a belligerent, win-or-die persona at his father's side this year, was looking for help from abroad to fly out and take his chances at The Hague, where there is no death penalty:

"He wants to be sent an aircraft," the NTC source said by telephone from Libya. "He wants assurances."

ICC spokesman Fadi El Abdallah said the court was trying to confirm the NTC comments and work out how to move the suspects:

"It depends where the suspect is and how we can get into contact with him and what would be necessary to bring him to The Hague. There are different scenarios," El Abdallah said.

Some observers question the accuracy of NTC information, given frequent lapses in intelligence recently. Some suggest surrendering to the ICC may be only one option for Saif al-Islam, who may hope for a welcome in one of the African states on which his father lavished gifts.

The African Union, and powerful members like South Africa, grumble about the nine-year-old ICC's focus so far on Africans and some of them may prove sympathetic. Even if arrested on charges relating to his role in attacks on protesters in February and March, Saif al-Islam could make defense arguments that might limit any sentence, lawyers said.

NTC forces, which overran Gaddafi's last bastions of Bani Walid and Sirte this month, lack the resources to hunt and capture fugitives deep in the desert, the source said.

NATO, whose air power turned the civil war in the rebels' favor, could help, he added.

But NATO, which will end its Libya operations at the end of the month, stresses its mission is to protect civilians, not target individuals - though it was a NATO air strike that halted Muammar Gaddafi's flight last week.

A captured pro-Gaddafi fighter at Bani Walid told Reuters that the London-educated Saif al-Islam had been in that town, south of Tripoli until it fell earlier this month.

The man, one of his bodyguards, said the younger Gaddafi was "confused" and in fear for his life when he escaped Bani Walid. If he has seen the gruesome video footage of his father's capture, he knows how he may be treated if he remains in Libya.

Asked what the NTC was doing to cooperate with the ICC, the vice chairman of the Council, Abdel Hafiz Ghoga, noted that the Libyans still hoped to try the suspects themselves:

"There aren't any special arrangements by the NTC," he said. "If Abdullah al-Senussi and Saif al-Islam are arrested inside Libya they will be tried and judged based on Libyan law.

"If they fled and went to countries such as Niger, for example, they will have to be surrendered to the ICC," he adding, noting reports that Senussi had already reached Niger.

Earlier this week, an NTC official said Saif al-Islam had acquired a passport in a false name and was lying low south of Ghat, a border crossing with Algeria through which his mother, sister and two of his surviving brothers fled in August.

Algeria is not a signatory to the Rome treaty which set up the ICC, but might face strong diplomatic pressure to hand over indicted suspects. The NTC has also been pressing Algiers to hand over the other Gaddafi relatives.

Niger, an impoverished former French colony, has said it would honor its commitments to the ICC. The mayor of the northern Niger town of Agadez, a transit point for other fleeing Gaddafi allies, told Reuters Saif al-Islam would be extradited to The Hague if he showed up.

Tunisia, to where other Gaddafi loyalists have fled, is also a signatory to the ICC's conventions.

A member of the Malian parliament who has been in charge of relations with Libya's NTC discounted reports that Gaddafi and Senussi had crossed Algeria or Niger into Mali.

The mystery over their flight has spawned many rumours.

In South Africa, one newspaper said a plane was on standby there to fly north and rescue Saif al-Islam along with a group of South Africans working for him. NTC officials say South Africans may have been among those killed in Sirte last week when Gaddafi was caught and killed.

Should he end up, like former Yugoslav leaders and others, in a Dutch jail, Saif al-Islam would have no shortage of defenders, though a defense of simply following his father's orders would carry little weight with ICC judges.

An Iraqi lawyer who defended allies of Saddam Hussein in the U.S.-supervised trials in Baghdad said the younger Gaddafi would be entitled to argue that his actions were legitimate acts of defense during an aggressive war by foreign powers.

Though some of the ICC indictment relates to the use of force against unarmed demonstrators before NATO intervened, Badie Arif, who defended former Iraqi deputy prime minister Tareq Aziz, told Reuters: "It was a foreign aggression made by colonialist countries and by NATO ... It is illegitimate and illegal by all international standards."

Geert-Jan Knoops, a Dutch-based international criminal law attorney, said Saif al-Islam could challenge the ICC case on two main fronts -- that it was a political show trial aimed at justifying Western-backed regime change, or by proving there was no evidence of a "political plan" to kill protesters.

A public platform could allow Saif al-Islam to embarrass some of the Western leaders with whom he led a rapprochement in recent years.

His role in promoting reforms, thwarted by domestic opponents, might also be used in his defense, though his angry outbursts against the revolt would enable prosecutors to bolster a case in which they accuse him of recruiting mercenaries to kill protesters as part of a "predetermined plan" with his father and Senussi.