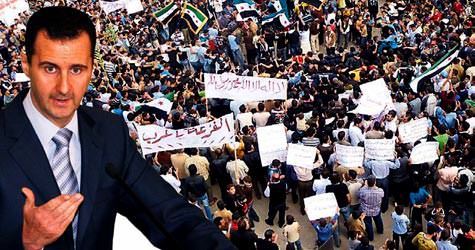 Western powers would cause an "earthquake" in the Middle East if they intervened in Syria, President Bashar al-Assad said in an interview published on Sunday, after protesters demanded outside protection from a crackdown that has killed 3,000 people.

Syrian officials were to hold more talks in Qatar with delegates of the Arab League, which wants to convene a dialogue in Cairo between the Syrian authorities and their opponents.

The League's two-week deadline for the planned dialogue to start expires Sunday, with Assad showing no signs of easing the crackdown, which is drawing increasing international outrage and criticism even from previously cautious Arab countries.

Syria, as Assad noted in his interview with Britain's Sunday Telegraph, sits at the heart of the volatile Middle East, where it borders Israel, Lebanon, Turkey, Iraq and Jordan.

"It is the faultline, and if you play with the ground, you will cause an earthquake," he said. "Do you want to see another Afghanistan, or tens of Afghanistans?"

Assad's remarks signal determination to hang onto power against a popular uprising that repression has failed to crush.

Mass protests have also failed to dislodge him, creating an unstable stalemate, which could perhaps be upset by the impact of Western sanctions or any surge in army and police defections.

Syria, a mostly Sunni Muslim country of 20 million, is ruled with an iron fist by members of Assad's minority Alawite sect, an offshoot of Shi'ite Islam, who also dominate the military, key sectors of the economy and a pervasive security apparatus.

The Arab League's committee on the Syrian crisis sent an "urgent message to the Syrian government expressing its severe discontent over the continued killing of Syrian civilians."

A Foreign Ministry source, quoted by state media, said the statement was "based on media lies" and urged the committee to "help restore stability in Syria instead of stirring sedition."

Saturday, security forces and pro-Assad militiamen killed at least 10 civilians, mostly in Homs, 140 km (85 miles) north of Damascus. At a big funeral for six of them in the city's Bab Amro district, mourners linked arms and sang old ballads.

"Tears are falling from the eye, my mother cries for Syria's youth," they chanted.

Syria has barred most international media, making it hard to verify conflicting accounts from activists and authorities.

Homs province, which borders Lebanon and is home to one of Syria's two oil refineries, is emerging as a center of armed resistance to Assad's rule after months of peaceful protests that often drew a violent response from security forces.

One activist group said fighters thought to be army deserters had killed 30 soldiers in clashes in Homs city and in an ambush in the northwestern province of Idlib Saturday.

In the interview, Assad compared the unrest with the 1980s, when his father, Hafez al-Assad, crushed Islamist and leftist challenges to his rule, killing tens of thousands of Syrians.

Many thousands were killed in 1982 in Hama, a city where an armed wing of the Muslim Brotherhood had made its last stand.

Opposition figures say Islamists played no part in starting the anti-Assad uprising that erupted in March.

Forty-one years of Assad family rule have stifled political party life and public debate in Syria, making it hard to predict how Syrians would vote if their country became a democracy.

Some argue that Islamists are unlikely to win power, citing secular traditions among Syria's majority Sunnis, who live alongside Christian, Alawite and Druze minorities.

Burhan Ghalioun, a main figure in the opposition Syrian National Council, formed in Istanbul in September, is a secular, Western-educated professor. The council also includes Islamists.

"We've been fighting the Muslim Brotherhood since the 1950s and we are still fighting with them," Assad said in the Sunday Telegraph interview, adding that Western countries "are going to ratchet up the pressure, definitely."

NATO military intervention in Libya played a decisive role in toppling Muammar Gaddafi, the third Arab leader to be overthrown after the revolutions in Tunisia and Egypt.

Western nations, which have been tightening sanctions on Syria to include the oil sector, have shown no appetite to repeat their Libyan operation in Syria, but demonstrators are increasingly calling for a "no-fly zone" to protect them.

Syrian authorities have blamed the unrest on foreign-backed "terrorists" they say have killed 1,100 soldiers and police.