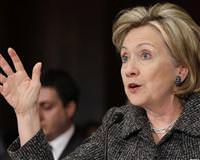 U.S. interests sometimes clash with its support for democracy in the Middle East, Secretary of State Hillary Clinton acknowledged on Monday, but she said democratic freedoms were the best guarantee of stability in the long run.

In a speech on Washington's response to the Arab Spring that toppled several U.S. allies, Clinton implicitly faulted the military council that succeeded former Egyptian President Hosni Mubarak for moving too slowly on elections.

She also acknowledged that the United States sometimes deals differently with pro-democracy movements, saying no two situations are the same and that diverging U.S. interests sometimes force it to adopt varying stances.

Clinton used her her speech to the National Democratic Institute to address questions such as why the United States built a military coalition to force Libyan dictator Muammar Gaddafi from power while it has been more cautious in Syria.

The U.S. justification for intervention in Libya -- to protect civilians -- would also appear valid in Syria, where activists say that Syrian President Bashar al-Assad's forces have killed hundreds of civilians seeking an end to his rule.

"Sometimes, as in Libya, we can bring dozens of countries together to protect civilians and help people liberate their country without a single American life lost," she said.

"In other cases, to achieve that same goal, we would have to act alone, at a much greater cost, with far greater risks and perhaps even with troops on the ground," she added.

"Our choices also reflect other interests in the region with a real impact on Americans' lives -- including our fight against al Qaeda; defense of our allies; and a secure supply of energy," she said.

"Over time, a more democratic Middle East can provide a more sustainable basis for addressing all three. But there will be times when not all of our interests align. We work to align them, but that is just reality," she added.

In the careful language of diplomacy, Clinton had tough words for the military council that took power in Egypt after forcing long-time U.S. ally Mubarak from office following mass protests against his three-decade authoritarian rule.

"If, over time, the most powerful political force in Egypt remains a roomful of unelected officials, they will have planted the seeds for future unrest. Egyptians will have missed a historic opportunity. And so will we."

Clinton said the United States must be prepared to work with democratically elected leaders that do not agree with it, including Islamist parties such as that which just won Tunisia's first free election last month.

"What parties call themselves is less important than what they do," Clinton said, saying parties which respect the rule of law, renounce violence, protect freedoms of speech and assembly and the rights of women should all be regarded as legitimate political players.

Clinton said the United States would continue to have "frank conversations" with long-time allies such as Bahrain, where the Sunni ruling family brought in troops from Sunni allies Saudi Arabia and the United Arab Emirates to help crush a protest movement earlier this year.

"Mass arrests and brute force are at odds with the universal rights of Bahrain's citizens and will not make legitimate calls for reform go away," Clinton said, saying the tiny Gulf country's monarchy had made public promises to begin political dialogue and investigate abuses.

"We intend to hold the Bahraini government to these commitments and to encourage the opposition to respond constructively to secure lasting reform," she said.

In other cases such as Syria, where the Assad government continues to respond violently to political protests, the message must be equally clear, she said.

"Those leaders trying to hold back the future at the point of a gun should know their days are numbered," she said, adding that another long-time U.S. foe, Iran, showed "breathtaking hypocrisy" when it claimed to back democracy abroad while killing protesters at home.

Clinton acknowledged that the issue of the Palestinians, who have sought U.N. recognition of their statehood despite Israeli protests and a U.S. vow to veto the measure in the U.N. Security Council, rankled many across the Middle East.

But she stressed the U.S. position that only negotiations with Israel can produce a real, viable Palestinian state living side by side in peace with Israel.

"It would shortsighted to think either side can simply put peacemaking on hold until the current upheaval is done. The truth is, the stalemate in the Arab-Israeli conflict is one more status quo in the Middle East that cannot be sustained," she said.