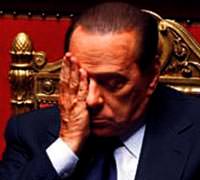 Silvio Berlusconi dominated Italy for 17 years with a unique mix of political talent and brazen behavior but in the end the born showman was humiliatingly jeered from office, brought down by pressure from abroad.

A man who had rejoiced in his ability to talk directly to ordinary Italians looked pale and isolated as he was forced to resign on Saturday after his broken promises and crumbling power brought Italy to the brink of financial disaster.

In scenes reminiscent of the departure of his mentor, Socialist Prime Minister Bettino Craxi in 1993, the 75-year-old media magnate was harried by angry crowds hurling insults and coins at his limousine as handed his resignation to President Giorgio Napolitano.

Berlusconi slipped out of the Quirinale presidential palace by a side entrance as thousands of demonstrators chanted "Clown! Clown!" and spontaneous street parties erupted.

The scandal-plagued premier, one of Italy's richest men, was forced out by weeks of turmoil on financial markets that pushed Italy's borrowing costs to levels that obliged Ireland, Portugal and Greece to seek bailouts of a kind which the euro zone could not afford for its third largest economy.

A remarkable week, that started with Berlusconi adamantly refusing to resign, ended a remarkable political career that began when he burst on to the scene in 1994 promising a fresh new approach after a corruption scandal that swept away Italy's postwar political order.

His demise was a far cry from 2008 when a landslide victory gave the media tycoon his third and strongest electoral mandate. He had been prime minister for longer than any postwar leader, painting himself as the only choice for the dominant conservative voting bloc and a bastion against communism.

Bolstered by unrivalled communication skills and a dominance of Italian media, Berlusconi had for years seemed immune to a series of controversies that would have destroyed a politician in most other parts of the world.

He also faces two ongoing fraud court cases, the latest in more than 30 prosecutions by magistrates he accuses of being communists bent on perverting democracy.

The perma-tanned media tycoon, once a cruise ship crooner, was always unrepentant about a notoriously off-color sense of humour and a series of diplomatic gaffes which led many foreign leaders to try to avoid being photographed near him.

Berlusconi had been in political decline for most of this year, his former mastery undermined by glaring misjudgments in local elections and three referendums, as well as the loss of a key alliance.

Often derided abroad for his facelifts, hair transplants, make-up and gaffes, Berlusconi until recently commanded a large following particularly among middle-class women, pensioners and the self-employed, striking a chord with his warnings about the dangers of left-wing extremists.

But with lurid details from assorted sex and corruption scandals filling newspapers for months and bitter government infighting poisoning the atmosphere around him, Berlusconi's touch finally deserted him.

He had seemed to have a good chance of hanging on for scheduled elections in 2013, until markets panicked by the Greek crisis turned on Italy, focusing on the inability of Berlusconi's squabbling government to pass meaningful reforms.

Up to the last, Berlusconi appeared to underestimate the gravity of the crisis, declaring this month that "restaurants are full, you have trouble booking seats on planes" as the economic pain mounted for millions of ordinary Italians.

As markets focused on Italy's huge public debt and stagnant economy, Italy's government bonds came under huge pressure and the European Central Bank had to move in August to buy bonds on the market to stop the crisis spreading.

In return it demanded tough economic reforms, effectively dictating government policy and destroying Berlusconi's boasts that he had shielded Italy from the euro zone crisis.

With his coalition crumbling around him and borrowing costs soaring out of control, Berlusconi finally agreed to resign after losing a crucial vote in parliament.

But in a sign of how much the collapse of market confidence was focused on him individually, bond yields soared even higher the day after the announcement because of market uncertainty about whether he would really go.

Napolitano had to publicly assure markets the flamboyant billionaire would step down and accelerated the political transition by asking former European Commissioner Mario Monti on Sunday to form a new government.

Berlusconi's personal decline began in 2009 when his estranged wife Veronica accused him of consorting with under-age women, finally sowing doubts in the minds of voters who had hitherto been charmed by his image as a self-made macho Latin male.

In addition, Berlusconi has persistently shown himself to be better at promises than action, failing to implement pledges in 2008 to use his business acumen to liberalise a notoriously inflexible and protected economy.

As owner of Italy's main private television channels and top-flight soccer team AC Milan after making a fortune in a Milan construction boom, he typified an Italian dream, with millions won over by his rags-to-riches story and optimism.

Berlusconi created his own party almost overnight in 1994 to fill the void on the right caused by the destruction of the long-dominant Christian Democrats by a corruption scandal.

His media empire Mediaset has a near-duopoly in television with state-run RAI over which, as premier, he had ultimate control. This gave him a much-criticised stranglehold on Italian media while he was accused of lowering cultural values with variety shows dominated by scantily clad starlets.

Critics also say he used his political and media power to fend off many prosecutions. His fall from power could unleash a new wave of cases by magistrates.

In the last year the Catholic Church has distanced itself from him, following reports of starlets and prostitutes dancing half-naked in return for cash and gifts. He boasted in one phone call of having sex with eight women in one night.

Berlusconi has always maintained the dinners he hosted were jovial affairs that involved little more than food, jokes and song. His only concession has been to say he is "no saint" and loves beautiful women.

He is given little chance of returning to high political office but analysts say he could continue to exert influence both through his media empire and the rump of the PDL party that he founded -- unless it implodes under the pressure of the political crisis as some expect.

Whatever happens, one of the most scandalous eras, in a country famed for scandal, appears to be over.