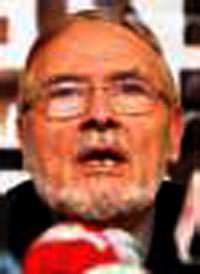 A leader of Syria's outlawed Muslim Brotherhood said on Thursday the Syrian people would accept military intervention by Turkey, rather than Western countries, to protect them from President Bashar al-Assad's security forces.

Mohammad Riad Shaqfa, who lives in exile in Saudi Arabia, told a news conference in Istanbul the international community should isolate Assad's government to encourage people in their struggle to end more than four decades of Assad family rule.

Hundreds of people have been killed this month, one of the bloodiest periods in the revolt that began in March. The United Nations says more than 3,500 people have died in the unrest.

If Assad's government refused to halt its repression, Shaqfa said Turkish intervention would be acceptable.

"If the international community procrastinates then more is required from Turkey as a neighbour to be more serious than other countries to handle this regime," Shaqfa said.

"If other interventions are required, such as air protection, because of the regime's intransigence, then the people will accept Turkish intervention. They do not want Western intervention," Shaqfa said.

The Syrian authorities have banned most independent media and blame the unrest on armed terrorist gangs and foreign-backed militants who they say have killed 1,100 soldiers and police.

NATO-member Turkey had close ties with Assad, but now says the Syrian government cannot be trusted after it ignored Prime Minister Tayyip Erdogan's repeated entreaties for a halt to violence and swift enactment of political reforms.

Ankara is considering imposing economic sanctions that would target Assad's government without harming the people, and is working with Arab governments to increase pressure on Damascus.

Several thousand Syrians, including army defectors who have taken up arms against Assad, have fled to Turkey, which has also hosted meetings of the opposition Syrian National Council.

The council is the foremost opposition group, bringing together people ranging from exiled dissidents to grassroots activists and members of the Muslim Brotherhood.

After mobs attacked Turkey's diplomatic missions in Syria at the weekend, Foreign Minister Ahmet Davutoglu hosted representatives of the Syrian opposition at dinner on Sunday.

Turkish officials have repeatedly denied media speculation that one of the contingencies being planned is the creation of a buffer zone inside Syrian territory to protect civilians and to make it easier for members of the Syrian military to desert.

On Thursday, Turkish officials denied a report in Sabah, a newspaper regarded as close to the government, that Syrian opposition representative had requested Turkey make plans for a no-fly zone a few kilometres (miles) inside Syrian territory that would gradually be expanded to cover the city of Aleppo.

Sabah said Turkey told the Syrian opposition that three conditions would have to be met: the no-fly zone must have a U.N. mandate, Arab League support and guarantees from the United States and European Union.

NO PLANS FOR RELIGIOUS STATE

French Foreign Minister Alain Juppe told French BFM Radio on Thursday that France was helping Syrian opposition groups become more organised. Juppe was due to visit Turkey for talks on Thursday and Friday that would focus on Syria.

"They (British officials) have told us that they will soon recognise the Syrian National Council as a representative of the Syrian opposition and the Syrian people," he said.

Shaqfa expressed admiration for the progress Turkey's democracy has made since Erdogan's Justice and Development Party (AK Party) swept to power over a decade ago, and said the Muslim Brotherhood would not seek to impose a religious state in Syria if it ever joins a government.

"We and our people admire the Turkish experiment. If we reach power, we will deal with everyone. We will make laws .. that focus on freedom, justice and equality.

"These are all taken from principles of the Muslim religion. We will benefit from the instructions of Islam to make laws to achieve freedom, but it will not be a religious state."

The AK Party government, whose leaders came from a banned Islamist party, has overseen a period of unprecedented prosperity in Turkey.

It has also introduced reforms that have reduced chances for military coups that have dogged Turkey in the past, without making any overt moves to roll back the republic's secularism.