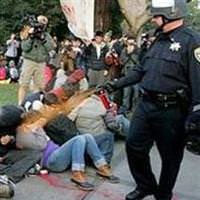 Two University of California, Davis police officers have been placed on leave while the school investigates the apparent use by campus police of pepper spray against seated student protesters, the university said Sunday.

Video footage of a policeman in riot gear using pepper spray on a group of roughly a dozen student protesters at close range in the university's central commons area posted on YouTube spread quickly over the Internet, sparking outrage among some faculty members.

The president of the University of California system, Mark Yudof, said the incident at UC Davis and confrontations at the UC Berkeley campus between police and protesters had prompted him to launch a discussion across all 10 UC campuses.

"I am appalled by images of University of California students being doused with pepper spray and jabbed with police batons on our campuses," Yudof said in a statement.

Yudof said he did not intend to "micro-manage" campus police or the chancellors, but the incidents required a system-wide response. He called for "a full and unfettered discussion about how to ensure proportional law enforcement response to non-violent protest."

The officers will be paid while on leave, university spokeswoman Claudia Morain said. She did not identify them.

In a public statement Saturday, UC Davis Chancellor Linda P.B. Katehi wrote that the use of pepper spray as shown on the video "is chilling to us all and raises many questions about how best to handle situations like this."

Student protesters at Davis had set up an encampment in the university's "quad" commons earlier this month as part of the nationwide Occupy demonstrations against economic inequality and excesses of the global financial system.

Their demonstrations, endorsed by a faculty association, included protests against tuition increases and what they viewed as police brutality on University of California campuses in response to recent protests.

The students had set up about 25 tents in the quad area, but they had been asked not to stay overnight and were told they would not be able to stay during the weekend due to a lack of university resources, Katehi said.

Some protesters took their tents down voluntarily while others stayed. The pepper spray incident appeared to take place Friday afternoon, when campus police moved in forcibly to evict the protesters.

Katehi said she was "saddened" by the manner in which protesters were removed and announced a task force of faculty, students and staff to investigate the incident.

She said she had also instructed the school to reevaluate whether university policy on encampments offered students sufficient "flexibility to express themselves."

The move announcing the task force came after Katehi came under criticism from members of her own faculty.