A first for England! 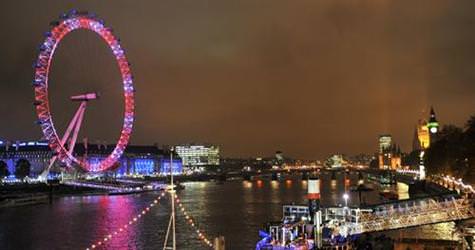 The London Eye, a large Ferris wheel which has become one of London’s symbolic locations, was lit up in red and white in order to commemorate President Abdullah Gül's trip to England.

This is the first time the London Eye, which opened in 2000, has been lit up with the colors of a nation's flag for the visit of a state leader. For the first time ever, the gesture was made for President Gül's visit. The famous Ferris wheel is sporting red and white lights in representation of the Turkish flag.
Meanwhile, after meeting with British Prime Minister David Cameron, Abdullah Gül was hosted by Deputy Prime Minister Nick Clegg at the Buckingham Palace.

After the closed meeting, Gül, his wife Hayrünnisa Gül and son Mehmet Emre Gül watched the giant Ferris wheel located on the River Thames, the London Eye, as it was lit up in red and white.
President Abdullah Gül commented on the gesture, "This is the first time they have done this. You might recall this was done once before at the Eiffel Tower, however as far as I know they have done that for others before. Here this is the first time this has been done. When you see it from the other side, there is a cabin in white and it looks like a crescent and star."
Gül later posed for photos in front of the London Eye with his wife and son.
Situated on the River Thames and frequented by millions every year, the London Eye Ferris wheel offers a bird's eye view of London.