Congo to vote despite violence 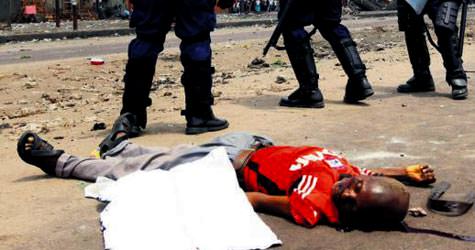 Congo plans to push ahead with the country's second-post war election on Monday, defying fears that a delay would be needed due to logistical problems and critics who called for the process to be reviewed because of irregularities.

After repeated delays, the run-up to the presidential and parliamentary vote turned violent in the capital at the weekend. Final rallies were canceled due to clashes between rival supporters, security forces opened fire on crowds and the main presidential challenger was prevented from campaigning.

The poll - which will pit President Joseph Kabila against 10 rivals while about 18,500 candidates will compete for 500 seats in parliament - will test the vast, central African nation's progress toward stability after decades of misrule and two wars in the past 10 years.

On Sunday evening, trucks ferried ballot boxes and papers across the sprawling capital, Kinshasa, as convoys of heavily-armed police patrolled the rubbish-strewn streets.

Across the nation, observers said election officials were scrambling to get equipment to remote polling stations.

The last conflict in the mineral-rich state officially ended in 2003 but the country remains plagued by pockets of instability and many people have yet to taste the dividends of eight years of relative peace.

In parts of the east, the vote will take place in areas still controlled by a plethora of local and foreign rebel groups.

Election commission chief Daniel Ngoy Mulunda said on Sunday that the country would prove critics of the process wrong by holding credible and peaceful elections.

"Everyone's going to vote tomorrow, it's going to be a celebration of democracy. The Congolese people are going to take the second step in the consolidation of their democracy. We have kept our promise," he said on the eve of the vote.

The election in 2006 was seen as broadly free and fair but gunbattles erupted after the voting.

Doubts over the election have stemmed from delays throughout the process, which meant that the preparations for the poll have been last-minute and, at times, chaotic.

United Nations troops and helicopters from Angola and South Africa have been called on to ferry election material to 60,000 polling stations across a nation the size of Western Europe with little infrastructure so some 32 million people can vote.

However, even in the capital voters complained of last-minute confusion over where they were meant to be voting due to polling stations being moved and errors with voter lists.

At a polling station in the Victoire neighbourhood of Kinshasa, resident Justin Lisacy said that he did not know where to go as he could not find his name on any list. "There will be lots of people so I want to know where I should go in the morning," he said.

The opposition has also protested that election lists were not properly vetted, leading to potential fraud.

After outbursts of violence during the campaign, there are also fears of a contested result. "We will come to vote. We believe in the rules. We hope (the candidates) respect them," Lisacy added.

Addressing the nation on Sunday evening, Kabila said that the security forces had taken all measures possible to protect the population during the electoral period and warned against a return to widespread violence.

"Our country has come a long way, from war and conflict of every type. We must take care not to go back to that," he said.

Kabila, who came to power when his father Laurent was assassinated in 2001 and then won the first post-war election in 2006, has been seen by many as the favorite due to the advantages of incumbency.

The failure of the opposition to unite behind a single candidate - after Kabila's camp pushed through a law scrapping the need for a run-off if no candidate secures a majority in the first round of voting - also bolstered his chances.

But Tshisekedi, who has spent decades in opposition and boycotted the last poll due to complaints of fraud, has succeeded in drawing large crowds as his campaign, which started late but picked up momentum as it headed to the anti-Kabila West.

Peter Pham, director of the U.S.-based Michael S. Ansari Africa Center, said it appeared that Tshisekedi had cemented himself as the anti-Kabila vote amid frustrations at the slow pace of progress, even if no formal alliance was in place.

"Ironically, the government's ham-fisted attempts to obstruct his campaign have only served to enhance his stature," he said.