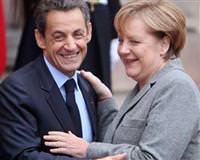 The European Union agreed new sanctions on Syria's oil and financial sectors on Thursday and added 11 entities and 12 people to an EU blacklist imposed over the Syrian government's violent crackdown on dissent.

The list of new names will become public on Friday and while full details were not immediately available, diplomats have said Syrian state oil company, the General Petroleum Corporation (GPC) would be among those targeted.

Diplomats said oil majors such as Royal Dutch Shell and France's Total could see their Syrian ventures grind to a halt as the GPC joins the roster of sanctioned companies.

"These new measures are related to the energy, financial, banking and trade sectors and include the listing of additional individuals and entities that are involved in the violence or directly supporting the regime," EU foreign ministers said in a statement.

They added 12 persons and 11 institutions and firms to an asset freeze and asset ban list, and prohibited financial support for trade and loans to the Syrian government, both bilateral and through international financial institutions.

The new measures prohibit EU firms from trading in Syrian state debt and ban banks from Syria from opening branches in EU countries or investing in European banks.

They also ban the export of equipment for the Syrian oil and gas industry, including refining and exploration, and investment by EU companies in firms constructing new power plants in Syria.

The sanctions also ban sales of software or equipment that can be used for Internet or telecommunications surveillance and the EU statement called for "restraint" on shorter-term trade support.

EU countries have imposed several rounds of sanctions against the government of President Bashar al-Assad Assad since May over its violent suppression of unrest, including an embargo on Syrian oil and a ban on new investment in the energy sector.

The GPC is responsible for supervising joint venture companies in Syria and is already blacklisted by the U.S. Office of Foreign Assets Control.

Royal Dutch Shell and China National Petroleum Corp. are both partners of GPC through the Al-Furat joint venture and some diplomatic sources said the blacklisting would likely make it hard for EU oil firms to keep operating in Syria.

Britain's Gulfsands also has investments in the country.

Shell and Total have already been forced to cut output in Syria due to lack of storage capacity.

British Foreign Secretary William Hague declined to comment on the effect of Shell, an Anglo-Dutch firm, but said all firms would have to respect the measures.

"Whatever we agree, we expect that to be observed across the commercial sector by all companies, but they have to sort that out for themselves," he said ahead of the ministerial meeting.

The EU statement said the bloc would continue to press for strong U.N. action on Syria and urged all U.N. Security Council members "to uphold their responsibilities to end the violence in Syria and support the Syrian people".

Russia and China, which both have oil concessions in Syria, teamed up last month to veto a Western-backed Security Council resolution condemning Assad's government for violence.