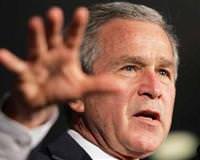 Amnesty International on Thursday called on Ethiopia, Tanzania and Zambia to arrest former U.S. President George W. Bush for human rights abuse when he visits the region this month.

During his time as President from 2001 to 2009, Bush authorized the use of waterboarding and other interrogation techniques that Amnesty and other human rights groups consider torture.

"International law requires that there be no safe haven for those responsible for torture; Ethiopia, Tanzania and Zambia must seize this opportunity to fulfill their obligations and end the impunity George W. Bush has so far enjoyed," Matt Pollard, senior legal adviser, said in a statement.

Bush has defended the use of waterboarding -- which simulates the sensation of drowning -- as key to preventing a repeat of the September 11 attacks on the United States. The U.S. Department of State had no immediate comment. Bush's spokesman could not immediately be reached for comment.

Bush is expected to visit the region this week to raise awareness about cancer in Africa, Amnesty said.