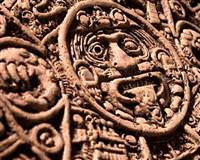 If you are worried the world will end next year based on the Mayan calendar, relax: the end of time is still far off.

So say Mayan experts who want to dispel any belief that the ancient Mayans predicted a world apocalypse next year.

The Mayan calendar marks the end of a 5,126 year old cycle around December 12, 2012 which should bring the return of Bolon Yokte, a Mayan god associated with war and creation.

Author Jose Arguelles called the date "the ending of time as we know it" in a 1987 book that spawned an army of Mayan theorists, whose speculations on a cataclysmic end abound online. But specialists meeting at this ancient Mayan city in southern Mexico say it merely marks the termination of one period of creation and the beginning of another.

"We have to be clear about this. There is no prophecy for 2012," said Erik Velasquez, an etchings specialist at the National Autonomous University of Mexico (UNAM). "It's a marketing fallacy."

The National Institute of Anthropological History in Mexico has been trying to quell the barrage of forecasters predicting the apocalypse. "The West's messianic thinking has distorted the world view of ancient civilizations like the Mayans," the institute said in a statement.

In the Mayan calendar, the long calendar count begins in 3,114 BC and is divided into roughly 394-year periods called Baktuns. Mayans held the number 13 sacred and the 13th Baktun ends next year.

Sven Gronemeyer, a researcher of Mayan codes from La Trobe University in Australia, who has been trying to decode the calendar, said the so-called end day reflects a transition from one era to the next in which Bolon Yokte returns.

"Because Bolon Yokte was already present at the day of creation ... it just seemed natural for the Mayan that Bolon Yokte will again be present," he said.

Of the approximately 15,000 registered glyphic texts found in different parts of what was then the Mayan empire, only two mention 2012, the Institute said.

"The Maya did not think about humanity, global warming or predict the poles would fuse together," said Alfonso Ladena, a professor from the Complutense University of Madrid. "We project our worries on them."