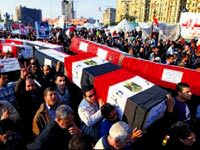 More than eight million Egyptians voted in the opening round of their first free vote in six decades in what the election chief said Friday was a turnout of 62 percent, far higher than in the rigged polls of deposed President Hosni Mubarak.

The Muslim Brotherhood's party and its ultra-conservative Salafi rivals looked set to top the polls, to the alarm of many at home and abroad. Moderate Islamists have won elections in Tunisia and Morocco in the past two months.

The emergence of ambitious Salafi parties is one of the starkest measures of change in post-Mubarak Egypt.

The world is watching the election for pointers to the future in Egypt, the most populous Arab nation and one hitherto seen as a firm U.S. ally committed to preserving its peace treaty with Israel and fighting Islamist militancy.

Abdul Moez Ibrahim, the head of the election committee, joked that the turnout was the highest in any Egyptian election "since the pharaohs." It was even greater than in the "forgeries of the past elections," he added, referring to the Mubarak era.

He said 8.3 million of 13.6 million registered voters in areas that voted in the first round had cast their ballots. Other parts of the country will vote in two more rounds, and run-offs must also be held in a six-week election process.

"The blood of martyrs has watered the tree of freedom, social justice and the rule of law. We are now reaping its first fruits," Ibrahim said in tribute to more than 850 people killed in a popular revolt that toppled Mubarak in February.

Protesters were out again in Cairo's Tahrir Square Friday to mourn 42 people killed in the 10 days before the vote at rallies demanding the generals who replaced Mubarak give way to civilian rule.

"Without Tahrir, we wouldn't have had these elections," said Mohamed Gad in the square that cradled the revolt. "God willing, the elections will succeed and the revolution will triumph."

But many of the young people who took to the streets early this year now fear their revolution risks being stolen, either by the army rulers or by well-organized Islamist parties.

Ibrahim announced the results of only a handful of clear-cut victories for individual candidates, with most going to run-offs next week, and gave no figures for party lists in the polls.

He said four candidates, two from the Brotherhood's Freedom and Justice Party (FJP) and two liberals, won over 50 percent of votes for outright victory out of 56 individual seats at stake.

The FJP said 39 of its candidates would fight run-off races. The party dominates a coalition with other smaller parties. Their coalition will be contesting 45 seats.

Yousry Hamad, a senior official of the Salafi Nour Party said 26 of its contenders were involved in run-offs, 24 of them going head-to-head with FJP candidates.

"We will go into the run-offs with all our might and there will be no deals with anyone. We will aim to do better than we have already," Nour leader Emad Abdel Ghafour told Reuters.

In Egypt's complex election process, two-thirds of the 498 seats will go proportionately to party lists, with the rest to individual candidates.

The Muslim Brotherhood, banned but semi-tolerated under Mubarak, has said its FJP expects to win 43 percent of party list votes in the first stage, building on the Islamist group's decades of grassroots social and religious work.

But the Brotherhood's website also forecast that the Salafi al-Nour party would gain 30 percent of the vote, a shock for some Egyptians, especially minority Christian Copts, who fear it will try to impose strict Islamic codes on society.

Nour said Thursday it expected 20 percent of the vote.

As in Saudi Arabia, Salafis want to bar women and Christians from executive posts. They would also ban alcohol, mixed beach bathing and "un-Islamic" art and literature.

Such curbs would wreck Egypt's vital tourism industry, which employs about one in eight of the workforce.

More secular-minded Egyptian parties, some of which were only formed after Mubarak's fall, had always feared that they would not have enough time to put up a credible challenge to their experienced and better-funded Islamist rivals.

The liberal multi-party Egyptian Bloc has said it is on track to secure about a fifth of votes for party lists.

Ibrahim, the election chief, acknowledged several violations in Monday and Tuesday's voting, notably campaigning outside polling stations, long queues, failure to stamp some ballots, and late arrival of ballot papers and of a few of the supervising judges. He said these did not affect the results.

Egypt's ruling generals, who have promised civilian rule by July, have said they will keep powers to appoint or fire a cabinet even after an elected parliament is installed.

The United States, which still gives Egypt about $1.3 billion a year in mostly military aid, has urged the ruling generals to step aside swiftly and make way for civilian rule.

The leader of the Brotherhood's FJP appeared to set the stage for a political tussle with the military this week by saying the majority in parliament should form the government, but the party later said it was premature to discuss the issue.

The FJP says its priorities are ending corruption, reviving the economy and establishing a true democracy in Egypt.

Ever pragmatic, the Brotherhood may avoid allying with Salafis in parliament and seek more moderate coalition partners to reassure Egyptians and foreigners of its intentions.

Senior FJP official Essam el-Erian said before the vote that

Salafis, who had kept a low profile and shunned politics during Mubarak's 30-year rule, would be "a burden for any coalition."

Kamal al-Ganzouri, asked by the army to form a "national salvation government," aims to complete it soon. State television said the cabinet was still being formed, but included at least half of the outgoing team.

Protesters in Tahrir have rejected Ganzouri, 78.

"It is unacceptable that after the revolution, an old man comes and governs. We don't want the army council anymore. they should go back to barracks," said Menatallah Abdel Meguid, 24.