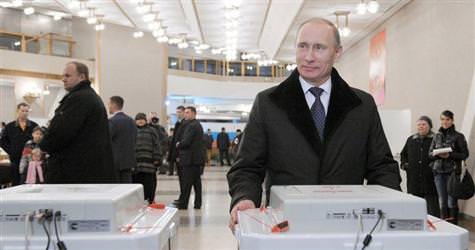 Russian voters dealt Vladimir Putin's ruling party a heavy blow by cutting its parliamentary majority in an election that showed growing unease with his domination of the country as he prepares to reclaim the presidency.

The result marked the biggest electoral setback for Putin since he first emerged to national leadership in 1999, steadying the country after the chaos of the immediate post-Soviet period.

With 95 percent of votes counted, Putin's United Russia had won 49.7 percent, compared with more than 64 percent four years ago. Opposition parties said even that result was inflated by fraud.

Although Putin is still likely to win a presidential election in March, Sunday's result could dent the authority of the man who has ruled for almost 12 years with a mixture of hardline security policies, political acumen and showmanship but who was booed and jeered after a martial arts bout last month.

"These elections are unprecedented because they were carried out against the background of a collapse in trust in Putin, (President Dmitry) Medvedev and the ruling party," said Vladimir Ryzhkov, a liberal opposition leader barred from running.

"I think that the March (presidential) election will turn into an even bigger political crisis; disappointment, frustration, with even more dirt and disenchantment, and an even bigger protest vote."

Putin has cultivated a tough man image with stunts such as riding a horse bare chested, tracking tigers and flying a fighter plane. But the public appears to have wearied of the antics and his popularity, while still high, has fallen.

Many voters, fed up with widespread corruption, refer to United Russia as the party of swindlers and thieves and resent the huge gap between the rich and poor. Some fear Putin's return to the presidency may herald economic and political stagnation.

Putin and Medvedev, who took up the presidency in 2008 when Putin was forced to step down after serving a maximum two consecutive terms, made a brief appearance at a subdued meeting at United Russia headquarters.

Medvedev said United Russia, which had previously held a two thirds majority allowing it to change the constitution without opposition support, was prepared to forge alliances on certain issues to secure backing for legislation.

"This is an optimal result which reflects the real situation in the country," Putin, 59, said. "Based on this result we can guarantee stable development of our country."

But there was little to cheer for the man who has dominated Russian politics since he became acting president when Boris Yeltsin quit at the end of 1999 and was elected head of state months later.

His path back to the presidency may now be a little more complicated, with signs growing that voters feel cheated by his decision to swap jobs with Medvedev next year and dismayed by the prospect of more than a decade more of one man at the helm.

"It's the beginning of the end," political analysts Andrei Piontkovsky said. "It (the result) shows a loss of prestige for the party and the country's leaders."

Two decades after the collapse of the Soviet Union, the communists were the main beneficiaries, their share of the vote rising to 19.1 percent from 11.6 percent in 2007.

"Russia has a new political reality even if they rewrite everything," said Sergei Obukhov, a communist parliamentarian.

Many of the votes were cast in protest against United Russia rather than in support of communist ideals because the Party is seen by some Russians as the only credible opposition force.

"With sadness I remember how I passionately vowed to my grandfather I would never vote for the Communists," Yulia Serpikova, 27, a freelance location manager in the film industry, said. "It's sad that with the ballot in hand I had to tick the box for them to vote against it all."

Opposition parties complained of election irregularities in parts of a country spanning 9,000 km (5,600 miles) and a Western-financed electoral watchdog and two liberal media outlets said their sites had been shut down by hackers intent on silencing allegations of violations.

The sites of Ekho Moskvy radio station, online news portal Slon.ru and the watchdog Golos went down at around 8 a.m. even though Medvedev had dismissed talk of electoral fraud.

Police said 70 people were detained in the second city of St Petersburg and dozens were held in Moscow in a series of protests against alleged fraud.

Opposition parties say the election was unfair from the start because of authorities' support for United Russia with cash and television air time.

Independent political analyst Dmitry Oreshkin said a separate analysis showed that United Russia fell even further in cities -- where it had between 30-35 percent of the votes and the Communist have 20-25 percent.

"This is a bad climate for Putin. He has got used to the fact that he controls everything, but now how can he go into a presidential campaign when United Russia has embittered people against their leader?" he asked.

Putin has as yet no serious personal rivals as Russia's leader. He remains the ultimate arbiter between the clans which control the world's biggest energy producer.

The result is a blow also for Medvedev, who led United Russia into the election. His legitimacy as the next prime minister could now be in question.