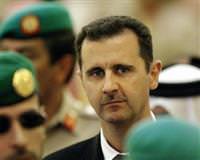 Tracks used for decades to smuggle animals and petrol across the border between Turkey and Syria are becoming more hazardous by the day and people making the crossing now face mortal danger.

And it is not just those on foot who are at risk. Lorry
drivers who have returned from Syria talk of dead bodies by the
roadside and burned-out military vehicles. Syrian troops guarding the border are opening fire at
"anything that moves", residents and refugees said, apparently
fearing armed infiltrators will cross into Syria to join a
nine-month-old uprising against President Bashar al-Assad.
Karem Faidom, 26, from the Syrian port of Latakia, fled to
Turkey nine months ago and now runs a small shop in Gorentas, a
village on the border. He said he was shot at earlier this week
as he tried to cross back into Turkey. "Some nights ago, some friends and I crossed over to Syria
to bring back sugar and olive oil to sell in the shop and also
to pay respects at my father's grave, who was killed near the
border as he fled Syria," Faidom said. "It was dark and we were going along this dirt track when
suddenly a red light shone on us and they started shooting. We
began to run. We were unarmed so the Turkish soldiers let us
back in. Somebody was hit in the leg. Then we heard Syria said
they had repelled infiltrators. That is ridiculous." Another Syrian man, who declined to be named, said: "We hear
gunshots at night and during the day. "Yesterday two men who crossed the Syrian border were shot,
one in the face and the other in the arm. They were taken to
Turkish hospitals," said the man who had taken shelter in
Guvecci village, close to the border in Turkey's Hatay province. Residents and refugees from Syria sheltering with local
families said smuggling back and forth through the wooded hills
was continuing, but they said they had not seen any armed men
infiltrating into Syria from Turkey. Turkey long courted Assad after he came to power in 2000,
but is now calling for him to step down. It is also giving
refuge to Syrian army defectors and hosting Syria's opposition
movement. There is little sign of an increased Turkish military
presence along the frontier but Syrian guards open fire at
"anything that moves, fearing they are infiltrators", said
another Syrian who lives in Guvecci. Rebel deserters with the Free Syrian Army have said their
forces clashed with the Syrian government this week, but denied
they had moved into Syria from Turkey. At the official border crossing at Cilvegozu, hundreds of
Turkish trucks carrying food and goods for the Gulf waited to
enter Syria. Many of the drivers were nervous about the journey ahead and
the tales of drivers leaving Syria gave them good cause for
concern.
"BODIES ON ROAD" "If anyone wants to end his life or kill himself, he should
go to Syria," said 38-year-old Turkish lorry driver Tayfun Sari
who had just spent nine days crossing Syria from Jordan, a
journey he said normally took him a day. "The army is fighting against civilians. They are shooting
civilians. Yesterday I saw five soldiers dead on the road after
Homs to Turkey and nobody was doing anything for them. They were
lying on the road," he said, his eyes bloodshot from lack of
sleep. "In Homs, civilians were cutting off the road with burning
tyres and the military was opening fire on protesters. "There were many bullet shells on the road and some trucks
had flat tyres. I was caught in cross-fire but luckily my truck
was not hit. I saw a Syrian military vehicle on fire and a house
on fire. "I am never going back to Syria. That's it." He and other drivers waiting to enter Syria said they were
increasingly singled out by Syrian government forces because of
their government's tough stance towards its neighbour. Turkey, with the second biggest army in NATO, said on Friday
it did not want to interfere in Syria's internal affairs but
could not stand by if its neighbour became a risk to regional
security. "Turks are being attacked on the road and receiving death
threats just because we are Turks," said driver Huseyin Sahin. Despite the danger, the drivers said that the only
alternative land route from Turkey to the Gulf, through Iraq,
was much longer and even less safe.