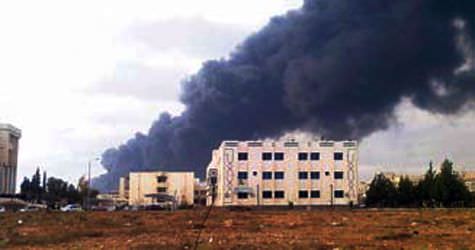 A Syrian pipeline carrying crude from oilfields in the east of the country was blown up near the restive city of Homs on Thursday, according to anti-government activists and the official news agency SANA.

Clouds of thick black smoke billowed over a high-rise suburb of the city, the epicentre of popular unrest against Syrian President Bashar al-Assad that began in March.

Refinery towers and storage tanks were visible in the background of one SANA photograph.

Rami Abdulrahman of the British-based Syrian Observatory for Human Rights said the pipeline fed a refinery in Homs.

But SANA said an armed terrorist group had attacked a section of pipeline taking crude beyond Homs directly to Banias on the Mediterranean coast.

Homs is a city of 800,000 people where activists say about 1,500 people have been killed in Assad's crackdown on anti-government protests.

"Authorities rushed to the spot, extinguished the fire, stopped pumping oil into the targeted pipeline and shifted it to alternative pipes," the agency said.

The Homs refinery serves part of Syria's domestic requirement for oil products. Saboteurs had already blown up the pipeline to the coast near Homs in July, according to SANA.

The Observatory network reported that nine people had been killed in Homs on Thursday by snipers and in "random" shootings.
Street protests began in Syria nine months ago, inspired by a wave of revolt across the Arab world. The ferocity of Assad's crackdown triggered desertions from the armed forces, and several thousand defectors have joined a guerrilla army staging hit-and-run attacks on security forces.

Assad, whose family has ruled Syria for 41 years, is under growing international pressure to cease violent repression of protests, in which the United Nations says over 4,000 people have been killed, and negotiate with opponents.

The head of the Arab League, which has threatened to impose sanctions if Syria does not comply with a peace plan and sign an agreement allowing international monitors into the country, said on Thursday "the ball is in the Syrian court."

"What we expect is as soon as possible Syria will accept to sign the protocol," Nabil Elaraby said during a trip to Iraq. "It is up to them. (If) they want to stop the economic sanctions, they sign."

With exports of its oil effectively suspended already due to European Union sanctions, Syria has plenty of raw petroleum in stock but limited refining capacity, of which the Homs installation -- now in a hub of the conflict -- is a key part.

Meanwhile Russia, keen to avert any foreign intervention of the kind that toppled Libyan leader Muammar Gaddafi, warned NATO states that outsiders should not "pick and choose the sweethearts" in Arab conflicts that were potentially sectarian.
"We are, to be very frank with you, extremely concerned with the fact that we are seeing (a) growing divide within the Islamic world, between the Sunni and the Shi'ite," Foreign Minister Sergei Lavrov told counterparts at NATO headquarters.

NATO Secretary-General Anders Fogh Rasmussen reiterated that NATO had "no intention whatsoever to intervene in Syria."

Western powers as well as neighbours Turkey and Jordan are calling on Assad to step down. Turkey imposed a 30 percent duty on imports from Syria in retaliation for a similar tax imposed on Turkish goods.

Turkish media reported two border crossings were closed on Thursday by Syria, one between Nusaybin and Qamishli and another at Akcakale.

Turkish government officials said Syria had informed them the closure of Nusaybin was for "repair and maintenance" work and that they would be opened when the work was finished.

Turkey on Thursday repeated a warning to Turkish citizens travelling through Syria not to drive at night and to only use major roads.

In a statement, it said clashes had taken place near the Turkish border in the last few days and issued a specific warning against travelling on the road from Homs to the Cilvegozu border gate.

Protesters are calling for a peaceful "dignity strike" by Syrians at the weekend, in what organisers hope to build into a general campaign of civil disobedience. Schools, universities, shops, public transport and government services are being urged to refuse to work on Sunday and close highways.
SANA said the army had fought back against gunmen who tried to block the Homs-Hama-Aleppo highway on Wednesday in the tense Hama province, killing one "terrorist." It said experts had defused seven improvised bombs in Hama.

The International Committee of the Red Cross (ICRC) said on Thursday the humanitarian situation in Syria was serious, but not a civil war according to international law as the armed resistance lacked organisation.

ICRC President Jakob Kellenberger said the agency had nearly tripled its budget for Syria for 2012 because it expected to expand its operations there considerably.