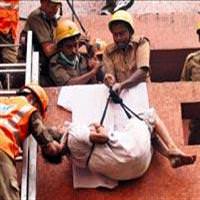 A fire tore through a seven-story private hospital in the eastern Indian city of Kolkata before dawn Friday, killing at least 84 people, most of them intensive care patients who were asleep and suffocated in the fumes.

Thick smoke engulfed the crowded hospital and fire-fighters smashed windows to evacuate people down ladders and with sheets from upper floors. Other patients were wheeled out on trolleys.

Rescue workers and locals criticised a lack of safety equipment and said staff fled the scene leaving windows and doors locked. The hospital had been warned there was a fire hazard months ago, state officials said.

"My sons and I rushed to the hospital and started breaking the windows so that some of the smoke would escape," said 35-year-old Saraswati Mondal, who lives in a crowded shanty town near the clinic in south Kolkata.

"As we broke the windows we could hear the patients crying out for help," said Mondal said.

The fire broke out in the basement and flames and smoke quickly spread through the building through air-conditioning shafts. Witnesses said the fire brigade took an hour to arrive. Police arrested six of the hospital's directors for negligence.

By mid-morning, the flames were under control and rescue workers had begun to bring the dead from the still-smoking building, including at least two children whose bodies were covered by green blankets, a Reuters witness said.

The vice-president of the AMRI hospital, in a mostly middle-income area of Kolkata, told reporters at least 73 people died in the blaze, all but three of them patients.

He said 90 more were evacuated and that the hospital complied with statutory safety rules.

"The fire was detected at 3.30 (a.m.)...we called the fire brigade within five to 10 minutes," S. Upadhyay told a news conference.

Angry local residents accused the hospital authorities of reacting too slowly and not helping patients to safety, and pointed out another fire had broken out there three years ago. That time there were no casualties.

Kolkata, formerly known as Calcutta, was for years the capital of British-ruled India. It is one of South Asia's largest cities, known as much for literary culture as for cramped slums. It is now the capital of West Bengal.

"It was horrifying that the hospital authorities did not make any effort to rescue trapped patients," Subrata Mukherjee, West Bengal's health minister told cable network NDTV.

The state's chief minister, Mamata Banerjee, immediately cancelled the operating licence for the hospital, part of a prominent chain of clinics in the city.

"Law will take its own course. Those responsible for so many deaths will be dealt with seriously," Banerjee told reporters.