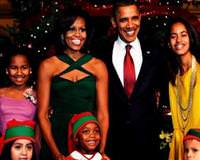 President Barack Obama struck a pious tone on Sunday at a Christmas concert featuring teen pop star Justin Bieber and other singers that the president attended with his wife and daughters.

Comedian Conan O'Brien, hosting the TNT "Christmas in Washington" show, joked that at this time of year, thoughts turn to a miracle child worshiped by millions worldwide.

Obama, who attended a church service with his family on Sunday morning - which he does only rarely - joked and played with young patients from a Washington-area hospital before the show but was serious in his remarks to the crowd.

"This is the season to celebrate miracles," he said after the closing medley.

"Every year we celebrate his birth because the story of Jesus Christ changed the world. For me and for millions of Americans, the story has filled our hearts and inspired our lives," he said, adding that Christian values of giving, gratefulness, service and compassion were "values that are shared by all faiths."

"So tonight let us all rededicate ourselves to each other, and in that spirit, from my family to yours: Happy holidays, merry Christmas, God bless you all," the president said.

Obama, who could face a tough reelection fight in 2012, does not speak often about his religious beliefs.

He has, however, fielded questions about Bieber at several of his recent public appearances, including a jobs event in rural Virginia and a school visit in Australia, where a female student asked last month why Obama didn't team up with the pop star to help boost his popularity.

"It's not easy to be a child at the White House these days. Santa's probably not going to stop at a house that leaves out a cup of organic soy milk and a plate of celery cookies," he said, to laughter.