Obama says U.S. will be loyal partner for Iraq 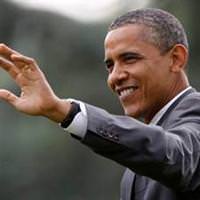 With Iranian influence and Syria's instability looming over Iraq as U.S. troops pack up to go, President Barack Obama assured Baghdad on Monday the United States would remain a strong partner beyond the withdrawal.

The removal of almost all U.S. forces from Iraq by December 31 has created uncertainty at a time when the region remains roiled by the Arab Spring, and amid fear that a bloody anti-government revolt in Syria could spread sectarian strife into neighboring Iraq.

But Obama, a fierce critic of the war who once warned that invading Iraq would be "dumb," told a news conference with Iraqi Prime Minister Nuri al-Maliki that the United States will remain a strong Middle East presence.

"As we end this war and as Iraq faces its future, the Iraqi people must know that you will not stand alone. You have a strong and enduring partner in the United States of America," he said.

The two men met at the White House to kick off a week that will ceremonially end the U.S. military venture in Iraq. Obama speaks to returning U.S. troops at Fort Bragg, North Car.C. on Wednesday.

Obama decided in October to pull U.S. forces out after a deal to keep thousands of U.S. trainers on the ground failed on the issue of immunity from prosecution in Iraq. As of Sunday, about 6,000 U.S. troops remained.

Almost 4,500 U.S. troops have died since President George W. Bush ordered the invasion in 2003, based on claims of weapons of mass destruction and al Qaeda ties that turned out not to exist.

An estimated 60,000 Iraqi civilians have also perished since the invasion and Obama specifically acknowledged "the untold number of Iraqis who have given their lives" in the conflict, a nod to criticism that the United States has glossed over this cost to the country it occupied.

He and Maliki later visited Arlington National Cemetery for fallen American service members, where they laid a wreath on the Tomb of the Unknowns in a somber ceremony as the U.S. and Iraqi national anthems were played.

Republicans criticize the president for not pushing harder to have some forces stay, amid concern about a power vacuum in the country.

The departure of U.S. troops raises questions about the ability of Iraqi security forces to keep the peace in a country still scarred by a bitter 2006-2007 civil war in which thousands died in sectarian and ethnic fighting.

Violence has diminished significantly since then, but tension between Iraq's Shi'ite and Sunni Muslims and Kurds continues to restrain economic and political progress.

Iran has tried to expand its influence in Iraq, particularly among fellow Shi'ite Muslims, but U.S. officials say some of those efforts have backfired with fiercely nationalist Iraqis.

Obama and Maliki were each asked about the role of Iran. Washington and Tehran are engaged in what appears to be an escalating proxy war, and relations deteriorated further after the Iranians claimed on December 4 they had shot down a CIA drone spying on their country, and then put it on display.

Obama declined to comment on whether the loss of the drone would compromise U.S. intelligence, noting only "we have asked for it back. We'll see how the Iranians respond."

Separately, U.S. Defense Secretary Leon Panetta told reporters aboard a military aircraft he did not expect to get it back "but I think it's important we make that request."

Maliki has irked Washington by failing to adopt the tough line other Arab League members have taken with Syrian President Bashar Assad. Some accuse his Shi'ite-led government of being too cozy with Iran.

But Maliki casts himself as a nationalist who will not bend to any outside power and Obama said he took him at his word:

"I believe him. And he has shown himself to be willing to make very tough decisions in the interests of Iraqi nationalism, even if they cause problems with his neighbor."

The president and first lady Michelle Obama will travel to Fort Bragg to thank troops returning home from Iraq, keeping the spotlight on national security.

Alongside the killing of al Qaeda leader Osama bin Laden in May, the closure of the Iraq war and drawdown of U.S. troops from Afghanistan are seen by the White House as key Obama accomplishments that he can flourish before voters in the elections next November.

But Americans are much more focused on the country's fragile economic recovery and high unemployment than foreign policy.

The cost to the U.S. taxpayer for the Iraq war in military spending alone is over $700 billion, with troop forces peaking during Bush's 2007-surge above 170,000 troops.