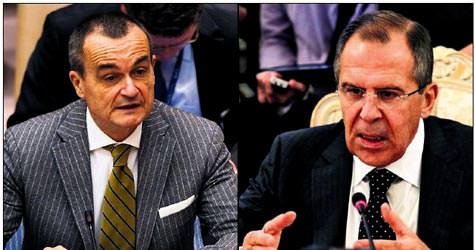 The U.N. Security Council agreed on Friday to France's request for a briefing on Syria's rights crackdown from the U.N. human rights chief, overcoming resistance from Russia, China and Brazil, Western envoys said.

He dismissed suggestions from Western envoys that Russia had opposed the briefing, although he acknowledged Moscow and others had reservations.

The rights council is based in Geneva. Russia, China, Brazil, India and South Africa, which have resisted Security Council action on Syria, have argued that complaints about Syrian rights abuses should be dealt with in Geneva, not New York.

France, Britain, Germany and the United States have been pushing for the council to take up the issue of Syria again. Last month, Russia and China vetoed a European-drafted resolution that would have condemned Damascus' crackdown on pro-democracy protesters and threatened possible sanctions.

Pillay reiterated to reporters in New York on Friday that more than 4,000 people had been killed in the crackdown against protesters that began in March.

She also dismissed Syrian President Bashar al-Assad's suggestion in an interview with an American television station this week that the United Nations lacked credibility.

Pillay said the U.N. information was "very credible," and she repeated her appeal to let U.N. investigators into Syria.

One Western diplomat told Reuters that Friday's closed-door discussions on whether Pillay should brief the council grew "very heated" at times. French Ambassador Gerard Araud had threatened to demand a "procedural vote" if the council could not agree on his proposal for Pillay to brief the council.

There are no vetoes in procedural votes on whether the council should take up an issue. But the need for such a vote was avoided once council members agreed to invite Pillay.

Churkin said some council members pointed out that since the agenda item under which Pillay would brief the council was the "situation in the Middle East," it would be appropriate for her to speak about the situation in the Palestinian territories.

One council diplomat told Reuters that the United States, France and Britain were among those that opposed having Pillay discuss the Palestinian question during a briefing on Syria.

A Western diplomat said it was "pretty disgraceful that Russia and China tried to exploit the cause of the Palestinians and conflate two important issues with the clear aim of taking pressure off Syria."

Another Western diplomat said Russia, China and Brazil were putting up the strongest resistance to action on Syria on the 15-nation Security Council.

"We feel they are misinformed," he said. "The situation is getting worse and we are seeking to get closer to Brazil to explain what is happening and show the crimes being committed daily by Assad."