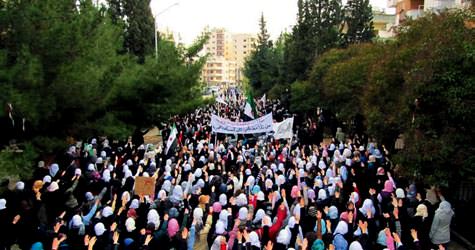 In a report based on dozens of interviews with army and intelligence defectors, it quoted one special forces soldier saying his brigade was told to "use as many bullets as you want" on protesters in the southern province of Deraa in April.

A sniper in the city of Homs said his commanders ordered that a specific percentage of demonstrators should die. "For 5,000 protesters, for example, the target would be 15 to 20 people," he told Human Rights Watch (HRW).

The United Nations says 5,000 people have been killed in Assad's crackdown on protests which erupted in March, inspired by uprisings which have brought down three Arab leaders.

Assad denied last week that orders were issued "to kill or be brutal." Syria's Foreign Ministry spokesman said security forces were clearly instructed not to use live ammunition.

But HRW said all defectors it spoke to said their commanders ordered them to stop the protests "by all necessary means" - a phrase they understood to authorize lethal force.

About half of the defectors said officers also gave direct orders to fire at protesters or bystanders, and assured them that they would not be held accountable, it said.

"Our general orders were to kill, destroy stores, crush cars in the streets and arrest people," HRW quoted a soldier who defected from the Syrian army's 5th Division as saying.

As well as ordering the use of lethal force against protesters, military commanders and intelligence officials also gave orders "to unlawfully arrest, beat and torture detainees," the Human Rights Watch report said.

"The defectors' statements leave no doubt that the Syrian security forces committed widespread and systematic abuses, including killings, arbitrary detention, and torture, as part of a state policy targeting the civilian population.

Syrian authorities blame the violence on armed groups they say have targeted security forces and civilians. Authorities say 1,100 soldiers and police have been killed.

HRW said armed attacks on security forces had increased significantly since September, but that the majority of protests since March had been largely peaceful.

Several defectors said that senior commanders told them they had received specific orders from Assad, including a brigade commander who said his instructions to attack the town of Rastan came directly from the president.

HRW said the former soldiers had named 74 commanders and officials who ordered, authorized or condoned killings, torture and unlawful arrests during the anti-government protests.

The group's findings echo those of a U.N.-backed independent investigation which said in a report last month that Syrian forces had committed crimes against humanity and soldiers had been given "shoot to kill orders."

An earlier U.N. fact-finding mission said it had drawn up a confidential list of 50 suspects linked to alleged crimes against humanity in Syria.