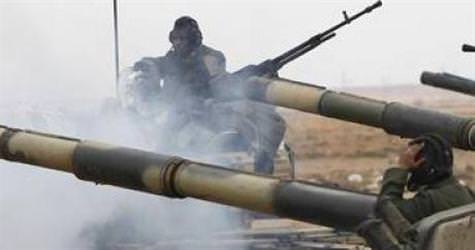 Army deserters killed 27 soldiers in southern Syria on Thursday, an activist group said, in some of the deadliest attacks on forces loyal to President Bashar al-Assad since the start of an uprising nine months ago.

The Syrian Observatory for Human Rights said the clashes flared in Deraa, where protests against Assad first erupted in March, and at a checkpoint east of the city where all 15 personnel manning it were killed.

The high casualties among security forces suggested coordinated strikes by the army rebels who have escalated attacks recently, raising the specter of civil war breaking out.

The United Nations says 5,000 people have been killed in Assad's crackdown on protests inspired by uprisings elsewhere in the Arab world. Assad has denied any orders were issued to kill demonstrators and says gunmen have killed 1,100 of his forces.

A report published by Human Rights Watch on Thursday, based on interviews with dozens of defectors, said army commanders have ordered troops to use "all means necessary" to halt protests, often giving explicit instructions to open fire.

One special forces soldier said his brigade was told to "use as many bullets as you want" on protesters in Deraa in April.

A sniper in the city of Homs said his commanders ordered that a specific percentage of demonstrators should die. "For 5,000 protesters, for example, the target would be 15 to 20 people," he told Human Rights Watch (HRW).

HRW identified 74 commanders who had ordered, authorized or condoned killings, torture and unlawful arrests during the anti-government protests. "These abuses constitute crimes against humanity," it said, calling on the United Nations Security Council to refer Syria to the International Criminal Court.

Assad, 46, whose family is from the minority Alawite sect that has held power in majority Sunni Muslim Syria for four decades, faces the most serious challenge to his 11-year rule.

Army rebels have stepped up their campaign against security forces in the last month, ambushing military convoys, opening fire on an intelligence centre on the outskirts of Damascus and killing six pilots at an air base.

Turkey lost its first citizen to Syrian unrest on Thursday. Munir Dural was shot dead near the town of Idlib, getting caught in crossfire there after his car was stolen.

Canada urged its citizens to leave Syria over concerns for the deteriorating security situation. "Our best advice is to leave Syria immediately, by any available means and while options exist," its foreign ministry said in a statement.

It cited concerns that new Arab League sanctions against Syria may make it difficult to leave the country quickly.

The United States and France, which blame Assad's forces for the violence, have urged the U.N. Security Council to respond to the rising death toll. "This cannot go on," U.N. Secretary-General Ban Ki-moon told reporters in New York. "In the name of humanity, it is time for the international community to act."

But on Thursday Russia offered a new, beefed-up draft resolution to the Council, and Western countries said for the first time they were willing to negotiate over it. [ID:nN1E7BE0G9]

Although Western envoys said the Russian text was too weak, their readiness to work on it offered a chance for the Security Council to overcome its deadlock and issue the 15-nation panel's first resolution on Syria's crackdown on opposition protesters.

The draft circulated unexpectedly by Russia expands and toughens Moscow's previous text, adding a new reference to "disproportionate use of force by Syrian authorities."

The draft, obtained by Reuters, "urges the Syrian government to put an end to suppression of those exercising their rights to freedom of expression, peaceful assembly and association."

The bloodshed prompted the head of the main Syrian opposition group to call on the rebels forces' Free Syrian Army to restrict operations against Assad's military to defending protests. "We want to avoid a civil war at all costs," Burhan Ghalioun of the Syrian National Council told Reuters last week.

But his influence over the insurgents appears limited.

One Free Syrian Army officer, speaking before Thursday's clashes, said the rebels were justified in targeting Assad's forces and said Ghalioun's comments betrayed "a lack of knowledge of the military basis of this regime."

"Anyone who bears arms against civilians, either army, security or shabbiha (pro-Assad militia), and kills civilians - we will respond and inflict whatever damage we can," said Major Maher Ismail al-Naimi.

In Istanbul, a former ambassador-turned-dissident announced the formation of an opposition group named the National Alliance of Revolutionary Forces in Syria.

Mohammad Bassam Imadi, Syria's former envoy to Sweden who resigned his post two years ago and left Syria earlier this month, said the group would work together with the Syrian National Council in a bid to overthrow the government.

"We constitute the majority of the revolutionary and political groups inside Syria. We have managed after a long time and a lot of effort to unite all these groups under one umbrella," Imadi told a news conference.

Syria's Foreign Ministry said Imadi had been dismissed and had his assets frozen last year after he was investigated for fraud and "using his authority for material gain."

Activists said Assad's forces combed the streets of eastern Damascus suburbs on Thursday, hunting for defectors and trying to break the opposition's "Strike for Dignity."

In the city of Hama, stormed by the army 24 hours earlier, they said the army took over a children's hospital and snipers could be seen on the top of government buildings.

The official SANA news agency said one member of a "terrorist group" was killed and three others wounded as they planted bombs in a villa they had robbed in Damascus province.