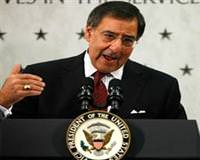 U.S. Defense Secretary Leon Panetta arrived in Libya on Saturday where a weak interim government is struggling to assert control two months after the capture and killing of dictator Muammar Gaddafi.

The visit follows a decision by the U.N. Security Council on Friday to lift sanctions on Libya's central bank and a subsidiary, clearing the way for tens of billions of dollars they hold overseas to be unfrozen to ease an acute cash crisis. The move is a boost for Libya's fragile government, its authority being challenged by a turf war between multitude militias that emerged from the war to end Gaddafi's 42-year rule.
Panetta, who arrived from Turkey, is due to meet Libyan interim Prime Minister Abdurrahim El-Keib and Defense Minister Osama Al-Juwali. Speaking in Ankara on Friday, he acknowledged the challenges ahead. "Standing back, it seems they are working through some very difficult issues," he told reporters.
"This is not a country that has a history of democratic institutions and representative government. This is going to take some work." The Security Council froze Libyan assets abroad - estimated at $150 billion - after the rebellion against Gaddafi broke out in February. The country's interim leaders had repeatedly appealed for the assets to be released, in order to pay the wages of public sector workers and re-build state institutions. The United States, which took part in the NATO bombing campaign of Libya, followed the Security Council on Friday in unfreezing more than $30 billion in Libyan government assets.