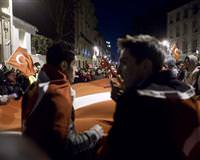 Several thousand Franco-Turks demonstrated in central Paris Thursday ahead of a parliamentary vote on a bill that would make it a crime to deny the Armenians’ claim of a 1915 mass killing by Ottoman Turks.

Ankara argues that there was heavy loss of life on both sides during fighting in the area.
Tension has risen between Paris and Ankara in the last week over the draft law put forward by members of President Nicolas Sarkozy's party that will be put to a vote around lunchtime.
Turkish Prime Minister Tayyip Erdoğan wrote a letter to Sarkozy last week warning political and economic relations would suffer grave consequences if the bill is passed.
When the debate began, public benches were filled with Turks and Armenians. Police strengthened their presence inside the chamber to head off any possible disorders.
Ankara sees the bill, proposed by 40 deputies from Sarkozy's party, is a blatant attempt at winning the votes of 500,000 ethnic Armenians in France in next year's elections, limits freedom of speech and is an unnecessary meddling by politicians in a business best left to historians.
Police said about 3,000 demonstrators were already on site with as many as 10,000 expected during the day, which also marks 32 years since a Turkish diplomat was assassinated by Armenian militants in central Paris.
Faced with Sarkozy's open hostility to Turkey's all-but stagnant bid to join the European Union, and buoyed by a fast-growing economy, Ankara has little to lose by picking a political fight with Paris.
With Turkey taking an increasingly pivotal and influential role in the Middle East, especially over Syria, Iran and Libya, France could experience some diplomatic discomfort, and French firms could lose out on lucrative Turkish contracts.
"Turkey is a democracy and has joined the World Trade Organization so it can't just discriminate for political reasons against countries," Europe Minister Jean Leonetti told France Inter radio. "I think these threats are just hot wind and we (have) to begin a much more reasoned dialogue."
The French government has stressed that the bill, which mandates a 45,000-euro fine and a year in jail for offenders, is not its own initiative and pointed out that Turkey cannot impose unilateral trade sanctions.
France passed a law recognizing the killing of Armenians in 2001, Turkey was in the midst of an economic crisis, and reacted in a similar vein, but figures show trade between the two countries nevertheless grew steadily.
The French lower house of parliament first passed a bill criminalizing the denial of the Armenian claims in 2006, but it was finally rejected by the Senate in May of this year.
The new bill was made more general to outlaw the denial of the claims, partly in the hope of appeasing the Turks. While it is very likely to be approved by the lower house, it could also face a long passage into law, though its backers want to see it completed before parliament is suspended at the end of February.