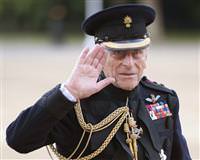 Queen Elizabeth visited her 90-year-old husband Prince Philip in hospital on Saturday as Britain's longest-serving royal consort recovered from minor heart surgery to ease chest pains he had suffered in the days before Christmas.

Buckingham Palace said the Philip had a "good night" after an operation to ease a blocked artery, but it appeared likely he would miss the royal family's traditional exchange of Christmas gifts on Saturday evening at the Sandringham royal estate.

Prince Charles, Prince Edward, Prince Andrew and Princess Anne also visited Papworth hospital near Cambridge to see their recuperating father, who said earlier this year he was looking forward to slowing down.

"Prince Philip was in good spirits," a spokeswoman for Buckingham Palace said, describing the visits. "He will remain in hospital under observation for a short period."

Philip had been preparing to spend Christmas with his family - including grandson Prince William and his new wife Catherine - at Sandringham in eastern England, but he may now have to spend the holiday in a hospital bed, perhaps even missing his own Boxing Day shoot.

The Duke of Edinburgh, known for his outspoken and sometimes brusque manner, has had a hectic year of engagements in 2011 including the wedding of William and Catherine, entertaining U.S. President Barack Obama and a trip to Australia.

There will be no let up next year when Elizabeth celebrates her 60th year on the throne.

Philip, who married Elizabeth in 1947, was taken to Papworth, one of Britain's main heart and chest centres, about 60 miles away in Cambridge on Friday.

"The Duke of Edinburgh was found to have a blocked coronary artery which caused his chest pains," the palace said. "This was treated successfully by the minimally invasive procedure of coronary stenting."

The operation involves inserting a small tube into the artery to clear any blockages.

Philip had attended a lunch for staff a week ago and had been on "very good form," the BBC said.

"He has had these chest pains before and I don't think it's anything untoward, but given his age they are being safe rather than sorry," former royal press spokesman Dickie Arbiter said.

Despite his age, Philip generally has been in good health and has ploughed through a busy array of charity work and social engagements.

A pivotal figure in the House of Windsor, Philip has a reputation as a fiercely loyal consort who prefers outdoor pursuits to introspection.

However, in a BBC interview to mark his 90th birthday in June he said he was hoping for a quieter life in older age.

"I reckon I've done my bit," he said. "I want to enjoy myself a bit now with less responsibility, less frantic rushing about, less preparation, less trying to think of something to say."

Britain's tabloid newspapers have delighted over the years in recounting his many public gaffes.

He once told British students in China: "If you stay here much longer, you'll be slitty-eyed."

Born on the Greek island of Corfu in 1921, Philip served in Britain's Royal Navy before marrying Elizabeth. They have four children, including the heir to the throne, Charles.