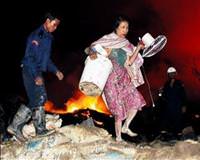 At least 17 people died and 80 were injured after an early morning explosion at a warehouse storing gunpowder, likely for use at mine blast sites, in Myanmar's biggest city of Yangon, police and fire officials said on Thursday.

The explosion caused a massive blaze and spewed smoke that was only brought under control by late morning, officials said. A police officer, who declined to be named, said 12 men and five women had been confirmed dead and further deaths were expected.

"A fire first broke out at a warehouse where gunpowder was stored," a Yangon fire department official, who asked not to be named said. "It then caused the explosion and then the fire spread. I don't think it's anything to do with sabotage."

The blast occurred at around 2 a.m. in Mingalar Taung Nyunt Township in the east of Yangon, Myanmar's former capital and its main commercial centre.

Ko Tin Than, 33, a taxi driver who happened to be driving near the warehouse at the time of the blast, said the whole area was covered with ash afterwards.

"It was just like a volcanic eruption like you see in the movies," he said. "Two or three people more than 100 feet away from the warehouse were killed by flying debris."

Some witnesses said the fire had triggered several smaller blasts. Police said three firemen were among the dead.

"As far as I know, these warehouses belong to the government and some of them were hired to the Myanma Economic Holding Limited under the Ministry of Defense," said a retired civil servant, declining to be named.

"I think the gunpowder stored there was meant for mining purposes, not for manufacturing weapons."

Fire engines from all parts of Yangon were at the scene, witnesses said.

Television pictures showed rescue teams carrying casualties on stretchers in the darkness around what appeared to be badly damaged buildings.

Witnesses said houses and factories were damaged but an early report that fire had spread to a nearby shipyard was not confirmed.

The shock from the explosion was felt by many people in eastern and central Yangon.

Than Soe, a resident in Yuzana Mingalar Housing Areas about a mile away from the site, said buildings shook, windows were shattered and pictures fell from walls.

"It was such a loud noise that at first we thought it was something like an asteroid falling to earth," he said.