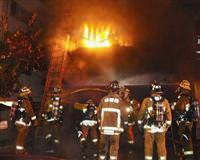 Police arrested a Hollywood man believed to be a German citizen on Monday in connection with a wave of 53 arson fires across Los Angeles that terrorized neighborhoods over the holiday weekend.

Harry Burkhart, 24, was taken into custody early on Monday morning after a reserve sheriff's deputy spotted him driving a van similar to one being sought in connection with the string of fires set in Los Angeles, Hollywood and surrounding communities.

Authorities booked Burkhart, a Hollywood resident who they believe to be a German national, on suspicion of arson and said he was being held at Los Angeles County jail.

"This has been literally a nightmare for people who live on the west side of L.A., the San Fernando Valley and West Hollywood," Yaroslavsky said. "I live in that community and I haven't had a good night's sleep since last week. I'm looking forward to that tonight."

Burkhart was expected to be advised of the charges against him at a hearing on Wednesday.

Authorities declined to comment on a Los Angeles Times report that Burkhart was embroiled in an immigration dispute with the federal government over the status of his mother.

But Los Angeles Police Chief Charlie Beck said that federal law enforcement agents "who have been privy to removal hearings" had recognized the suspect from surveillance videotape taken near several of the fires.

The chief said detectives believed that Burkhart acted alone but said residents should remain vigilant and report any suspicious activity.

The first of the more than 50 arson blazes broke out on Friday and the rash of fires, most of them set in cars and parking structures, some spreading to carports and homes, continued into the early morning hours of Monday morning.

The spate of arsons left residents on edge during the holiday weekend, as fires broke out seemingly at random across neighborhoods and sirens screamed through the night.

Los Angeles County Sheriff Lee Baca said the person who had set the fires was "perhaps most dangerous arsonist in the County of L.A. that I can recall."

Mayor Antonio Villaraigosa said the fires had caused an estimated $3 million in damage.

There were no fatalities caused by the fires but one firefighter was injured and another person suffered from smoke inhalation during a blaze that broke out on New Year's Eve.

One of the fires damaged a house in the Hollywood Hills where late rocker Jim Morrison was inspired to write the 1968 song "Love Street" about his girlfriend.

Baca said that the deputy credited with detaining Burkhart was a part-time reserve officer who makes only $1 a year because he is essentially a volunteer.