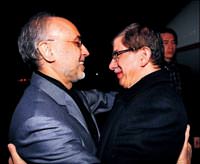 Evaluating 2012, Foreign Affairs Minister Davutoğlu states, "With the U.S. elections, what is set to transpire in the EU and developments in the region, this upcoming year will be a critical one.”

Foreign Affairs Minister Ahmet Davutoğlu departed for Tehran yesterday, within the framework of an agreement reached with Iran's Foreign Affairs Minister Ali Akbar Salehi to consult with one another at least twice a year. En route, he offered an evaluation of Turkey's foreign policy in the upcoming year.
Davutoğlu stated that there were three critical developments which directly affect Turkey, the global economic-political order of 2011, the political-economic crisis in the EU and the developments ensuing in the Middle East including our direct surroundings. "Due to all of these issues, 2011 was a painful year. We will continue to play an active role in these crises into the New Year," stated Davutoğlu. "The elections in the United States, what will happen in the EU and the developments to follow in our region all result in making 2012 a critical year. Turkey is in such a critical position; it is a nation that has organic relations with all of these actors. It is within that framework of our close contact with all of the surrounding regions and global actors, that 2012 will play an indicative role," states Davutoğlu.
When asked, "What are the best and worst scenarios for Syria in 2012?" Davutoğlu responded by stating, "We are expecting significant changes in Syria in 2012. That is because; if a nation has openly displayed their capacity to determine their own will, it is impossible to try to block them.
What we believe needs to transpire in Syria, and is the best scenario is for the situation to come to an end in accordance with the Syrian public's demands. Unfortunately the most negative scenario would be for the oppression to continue and as a result for the tension and internal conflict in the country to increase."
BEWARE OF POLARIZATION
Commenting on the developments in the Middle East, Davutoğlu stated, "Turkey is against any form of polarization. There are some willing to start a regional Cold War over Sunni-Shi'ite tensions. "We are determined to prevent a regional Cold War. Sectarian regional tensions would be suicide for the whole region," Davutoğlu said.
FOREIGN AFFAIRS MINISTER TO WARN IRAN ON NUCLEAR ISSUE
Foreign Affairs Minister Ahmet Davutoğlu has departed for Iran's capital Tehran where he is scheduled to hold a series of meetings. Arriving by private plane to the Mehrabad Airport, Davutoğlu was greeted by Iranian Foreign Affairs Minister Ali Akbar Salehi as well as by other officials.
In addition to meeting with Salehi last night, Davutoğlu also met up with Iranian First Vice President Mohammad Reza Rahimi. During the meeting, in addition to discussing Turkish-Iran relations, other regional issues primarily involving Iraq, Syria and Palestine were also handled. Today, Davutoğlu will meet with Iranian Parliament Speaker Ali Larijani , President Mahmoud Ahmadinejad and Chief Nuclear Negotiator Saeed Jalili.