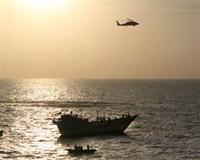 Just days after Iran warned them not to return to the Gulf, U.S. naval forces in the nearby Arabian Sea rescued 13 Iranian fishermen who were held hostage by pirates for more than a month, the Navy said on Friday.

Forces with the USS John C. Stennis aircraft carrier strike group - the target of threats by Tehran on Tuesday amid heated tensions with the United States - said they freed the Iranians without firing a shot. Fifteen pirates believed to be from Somalia were taken prisoner.

The fishermen were sent home with food and fuel, wearing baseball caps with the name of the U.S. warship that freed them.

"Once we released them, they went on their way very happily, waving to us, wearing USS Kidd Navy ballcaps," said Rear Admiral Craig Faller, commander of the carrier strike group.

The USS Kidd is a guided-missile destroyer.

The United States does not have formal diplomatic relations with Tehran, which is at odds with Washington and other western governments over its nuclear program. The U.S. State Department said there had been no official communication with Iran about the rescue, which it described as a "humanitarian gesture."

Iran announced plans on Friday to hold new naval exercises in the Strait of Hormuz next month, the latest in a series of forceful gestures in the world's most important oil shipping lane.

Iran briefly spooked oil markets in late December when it threatened to shut off the Strait of Hormuz if new U.S. and EU sanctions halted its oil exports. It ratcheted up tensions again this week by threatening to take action if the Stennis came back to the Gulf after it departed on December 27.

"I recommend and emphasize to the American carrier not to return to the Persian Gulf," Iran's army chief, Major General Ataollah Salehi, said on Tuesday. "We are not in the habit of warning more than once."

At the Pentagon, Defense Secretary Leon Panetta praised the Navy crew's handling of the incident.

"It makes it very clear to (the Iranians) that - despite how much they often try to provoke us - that the United States in this kind of situation is going to respond as we should in a very humanitarian and responsible way," Panetta told CBS News.

Faller, speaking on a conference call with reporters at the Pentagon from his ship in the northern Arabian Sea, said the rescue operation took place on Thursday morning about 175 miles southeast of Muscat, the capital of Oman.

The strike group got a distress message from the master of the Al Molai, the Iranian-flagged fishing vessel, who told the Americans he was being held captive by pirates. He was speaking in Urdu, a language the Somalis apparently did not understand.

"They expressed to us that they had been boarded and taken over approximately one to two months ago and that they had been travelling the area of the northern Arabian Sea and opposite the coast of Somalia," said Commander Jennifer Ellinger, the commanding officer of the USS Kidd.

The American boarding vessel approached, warning everyone on board to surrender their weapons. The pirates hid but quickly surrendered without a fight and were transferred to the Stennis.

"We're consulting with international partners. You know, sadly, this is not a new thing," she said.

"We have more than 1,000 pirates who've been picked up at sea who are under prosecution in some 20 countries. So this is always a question of where to send them and who will do the prosecution."

The pirates that commandeered the Iranian boat brought little in the way of supplies and Ellinger suspected they were forced to fish for their food.

Faller doubted they had access to communications and knew about the latest rhetoric from Iran that had escalated tensions.

"We think it's very doubtful that the Iranians or the pirates were aware of recent events of the last couple of days, given what we observed with the fishing vessel," Faller said.