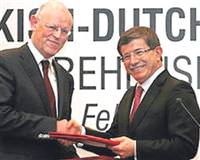 Turkey has allegedly deported a Dutch national who was introduced as a diplomat last year however was actually collecting information on Kurdish organizations in Turkey.

According to an article in Holland's Volkskrant newspaper, the Turkish government has deported an agent who works for the Dutch intelligence service and was assigned to Turkey six years ago, upon discovering the activities the agent, whose identity was kept confidential, was involved in.

Dutch diplomats are refusing to comment, beyond stating that it is a 'state secret', while Turkish officials have also refused to relay further information.

According to the article, the news of the Dutch diplomat's deportation was kept under wraps in order to avoid disrupting relations with Turkey.

ALLEGATIONS OF AIDING THE PKK

The news article states that the Turkish government has accused the Holland administration of aiding the PKK terrorist organization via civil society organizations.

Supposedly information has surfaced revealing that it is noted in Dutch intelligence reports that PKK establishments in their nation have supplied PKK camps with aid in the form of clothes, products, food and funds.