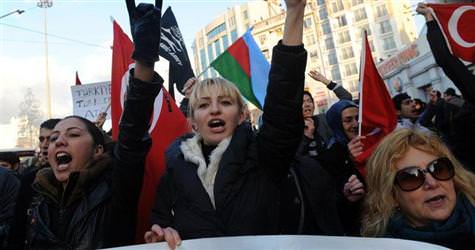 Turkish immigrant workers throughout Europe will be flocking to Paris to hold a large-scale protest of the ‘denial’ bill, which foresees criminalizing the denial of Armenian allegations, should the bill be passed at the January 23rd Senate meeting.

According to Hikmet Türk, spokesman for the Turkish Associations in France Coordination Committee, the numbers today of Turks based in Europe expected to attend the rally will be at least 35,000.

Türk explains, ''There are 75 buses coming in from Germany, 50 from Holland, 40 form Belgium and 15 buses filled with Turks from England. Taking into consideration all of the other buses that will be bringing in Turks from other parts of France into Paris, the total number of buses alone anticipated to arrive in the capital today is expected to reach over 500." In addition, Türk also reminds that including the number of protesters that choose to use speed trains or their own vehicles, the crowd to come out today is expected to reach 35,000.

The rally will begin at noon today local time at the Denfert Rochereau square and will come to a close at five p.m. in front of the senate building. The protest aims to emphasize that the bill challenges freedom of speech as well as the French constitution and will point out a message written in a report which states that history should be written by historians and not politicians.

The draft bill was accepted by the assembly general council on December 22nd, which was followed by a protest in front of the parliament. Should the French Senate accept the bill on January 23rd, a protest is expected to be staged on the very same day in front of the Senate building.