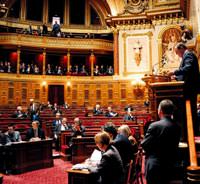 A total of 65 members of the French Assembly and 77 members of the Senate have signed a motion to halt the Armenian bill which has been brought to the Constitutional Council. Members from Sarkozy’s party were amongst those who signed the motion.

A motion signed by 65 members of the French Assembly and 77 members of the Senate was officially presented to the Constitutional Council in an attempt to halt the bill intended to criminalize the denial of Armenian allegations regarding events that transpired in 1915.

The initiative, which was spearheaded by Jacques Mezard in the Senate managed to collect 77 signatures, while Union for a Popular Movement member Michel Diefenbacher's efforts in the Assembly resulted in the collection of 65 signatures. Diefenbacher is also the head of Turkish-French Parliamentary Friendship Group, at the Parliament.

The Constitutional Council is expected to reach a ruling within a month's time. The signatures gathered from both the Senate and Assembly were not just from members of the smaller parties; the motion was also signed by MP's from UMP as well as from the main opposition Socialist party. Jacques Myard, Michel Diefenbacher and François Cornut-Gentille, the parliamentarians who pioneered the motion, released a joint statement, stating; "Members of both the party in power and the main opposition, whether from the Senate or the Assembly voted on the bill and now once again members from the both the majority party and its main opposition are opposing the implementation of that bill." The statement also reminded of the fact that the bill was brought to the assembly by a fellow MP and not the government and used the expression, "This is not a parliamentary or government debate."

'HISTORY SHOULD BE LEFT TO HISTORIANS'
"What has happened does not equate to not acknowledging or disregarding Armenians' pain. Our intentions are to act in accordance with the constitution, freedom of speech, thought and research," read the statement which also reminds that the assembly members who are opposing the bill are doing so also in accordance to the notion that history should be left to historians and parliamentarians should not rewrite history, as is emphasized in a report released by the research commission which was formed by the assembly three years ago."

According to the information obtained, 52 of the signatures collected in the Assembly were from members of the center-right UMP and the "New Centre Group", 11 signatures were from Socialist members and two were from independent MP's.

CANCELLATION HIGH POSSIBILITY
While the Constitutional Court is anticipated to rule in favor of the bill's cancellation, the Armenian lobby will not have the opportunity to revisit the bill during the current legislation period, the reason being that the current legislation period comes to an end in March due to the elections. In this case, Sarkozy will not have the opportunity to sign this crucial bill against Turkey.

The bill was first accepted by the French Assembly and latest by the French Senate last week. In order to apply to the Constitutional Court for the halting of the bill deemed to go against constitutional values, 60 signatures were required from senators and an additional 60 from MP's. Not only were the necessary number of signatures collected, even further support surfaced from both the Senate and the Assembly in opposing the passing of the bill. Lawmakers in France, political journalists and NGO members were vehemently against the bill's passing.