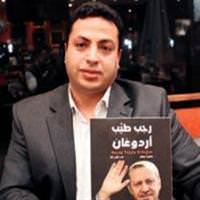 The Arabic edition of a book entitled ‘Recep Tayyip Erdoğan: The Birth of a Leader’ is now being distributed in Egypt.

Written by Hüseyin Besli and Ömer Özbay and translated by Egyptian academic Tariq Abduljalil, 5,000 copies of the Arabic version of the book have been released and are on stands in Egypt.
The book was promoted last month at the International Cairo Book Fair. The Beşir Publishing House, which released the Arabic edition in Egypt, will also be distributing the book to North African nations from Egypt.

Tariq Abduljalil, a professor at the Ain Shams University in Egypt and the translator for the Arabic edition explains that the first Arabic edition of the book was done last September and was released in Lebanon and now they are distributing the Arabic version in Egypt.

Explaining that it took nine months to complete the translation, Abduljalil goes on to state, "Erdoğan has all of the qualities of leadership. What impresses me the most is that after rising from the public, Erdoğan never forgets the public."

Abduljalil states that he translated this book in order for the Arab world to be able to benefit from learning about Erdoğan's experiences. Tariq Abduljalil also revealed plans to publish a 500 page book in Arabic consisting of a compilation of speeches made by Prime Minister Erdoğan at the Alliance of Civilizations.