“We will not allow Israel to use the NATO system” 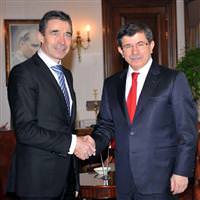 Foreign Affairs Minister Ahmet Davutoğlu stated that Turkey will never allow for a third party to use the NATO anti-missile radar defense system, and emphasized, “especially if it were to be Israel, then our position would be even further clear and direct.”

Davutoğlu was speaking at a joint press conference held with NATO Secretary-General Anders Fogh Rasmussen, after the two met at the Foreign Ministry.

When asked to comment on the recent attack on Zaman newspaper bureaus in Europe, Davutoğlu responded by stating; "

"Our stance would be the same if it were to have happened to press members from other papers. We strongly condemn the terrorist attack on Zaman's Europe bureaus and feel that this is not just an attack staged against one of our respected press establishments, but it is also an attack on freedom of thought and the press in Europe. We are expecting all countries to take active and protective measures. I want to express my condolences to press members from Zaman's offices in Europe and want to express once again that we will always be in solidarity with them."

In response to a question regarding whether or not Israel will receive intelligence obtained from the NATO anti-missile radar defense system to be set up in Turkey, NATO Secretary-General Rasmussen expressed how pleased he was that Turkey has agreed to be one of the hosts for the NATO system and went on to state the following:

Davutoğlu responded by stating, "The NATO facilities will only be used amongst NATO members."
Davutoğlu went on to comment on certain news articles that have surfaced in the Turkish press and primarily over the internet, including one news item that inferred that an Israeli missile was used to test the NATO system, by stating that they were "complete fallacies and had no basis."

Davutoğlu said, "These are complete fabrications. We will never allow for any third party to use any NATO facilities. I am clearly expressing this. "Especially if it were to be Israel, then our position would be even further clear and direct."