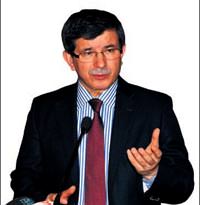 As Foreign Affairs Minister Ahmet Davutoğlu continues to pursue efforts to exert pressure on Syrian State Leader Bashar Assad, he will be delivering the message “We can no longer remain silent” at both the G-20 summit and the Friends of Syria Group Meeting in Tunisia.

The question of when a new resolution draft will be presented in the United Nations Security Council, following Russia's veto, will be determined after the upcoming meetings in Mexico and Tunisia. As efforts continue to seek out international legitimacy to persuade Assad to step down, Davutoğlu will reiterate the message, "Whatever we do, let's do it together" in meetings in both Mexico and Tunisia. Davutoğlu will overtly express that the international community can no longer remain silent and will continue to seek out support, primarily from the West. Ankara is especially uncomfortable by the fact that the West has not yet taken action geared towards Syria.

Commenting on the speed in which France and England pursued action in Libya, a high-level official states, "The West has no intentions of intervening due to both economic and election concerns." The official also said, "Of course, there is also not a lot of petrol in Syria." The Christian minority in Syria has been pointed to as another reason the west is apprehensive. While Turkey continues to increase exerting pressure on Russia to not issue an additional veto, expectations are that the method in which a humanitarian aid corridor is to be established will be determined at the February 24th meeting in Tunisia.

Speaking to SABAH prior to the critical meeting directed at Damascus, a high-level official states, "How humanitarian aid will be delivered is not clear yet. We would like the route to be established through the Mediterranean. What matters is that however much pressure is exerted by the international community is just how strong we can act. In order to do this, we need simultaneous pressure to be exerted by the G-20, the Arab League, OIC and the EU."